During our visit to Malta we stayed on the island of Gozo, in the small town of Nadur where my Nannu grew up. We spent most of our week in Malta on Gozo, but we did make sure to take at least one day trip over to the mainland of Malta to explore the unique sights scattered around this tiny island country.

There is so much to do on the main island of Malta that you definitely need more than one day to experience everything, but since one day was all we could afford we really made the most of it.

Here are some of the top can’t miss experiences on Malta. 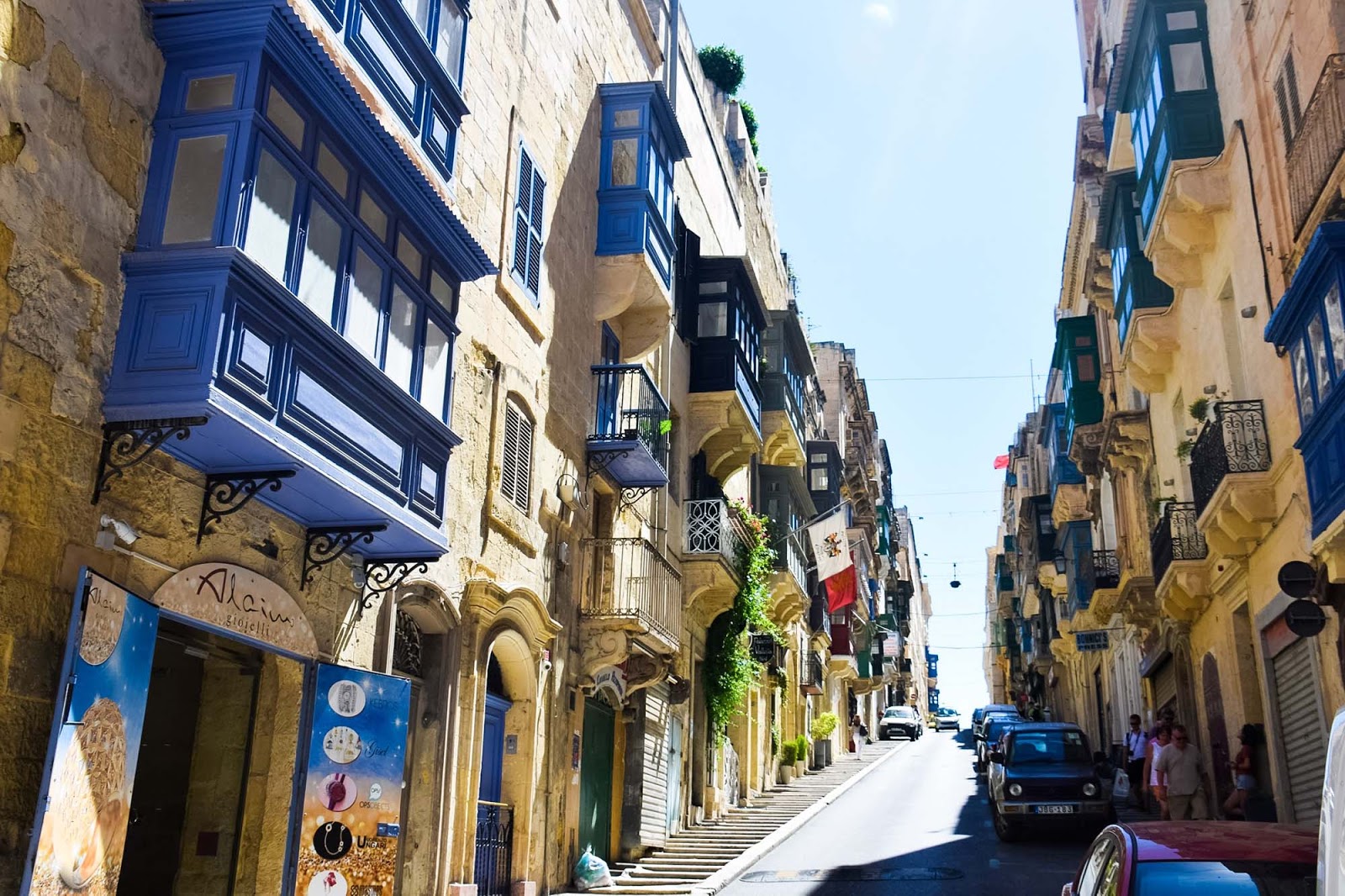 Explore the tiny streets of Valletta

Valletta, the capital of Malta, was built by the Knights of St. John with the idea that it should be ‘a city built by gentlemen for gentlemen’. It is incredibly small, only 1km by 600m and still retains is 16th-century elegance and charm.

It has been named as a UNESCO World Heritage Sight and described as ‘one of the most concentrated historic areas in the world’. The narrow cobblestone streets are filled with tiny cafes, unique boutiques, fashion and gift stores and local arts.

Window boxes fall over the street from many of the houses and the hilly nature of the city offers some unique views of the city life. I think this might be one of the only capital cities of a country where you can look up and see people’s washing hanging in the street from two window boxes!

Check out the best places to stay in Valetta 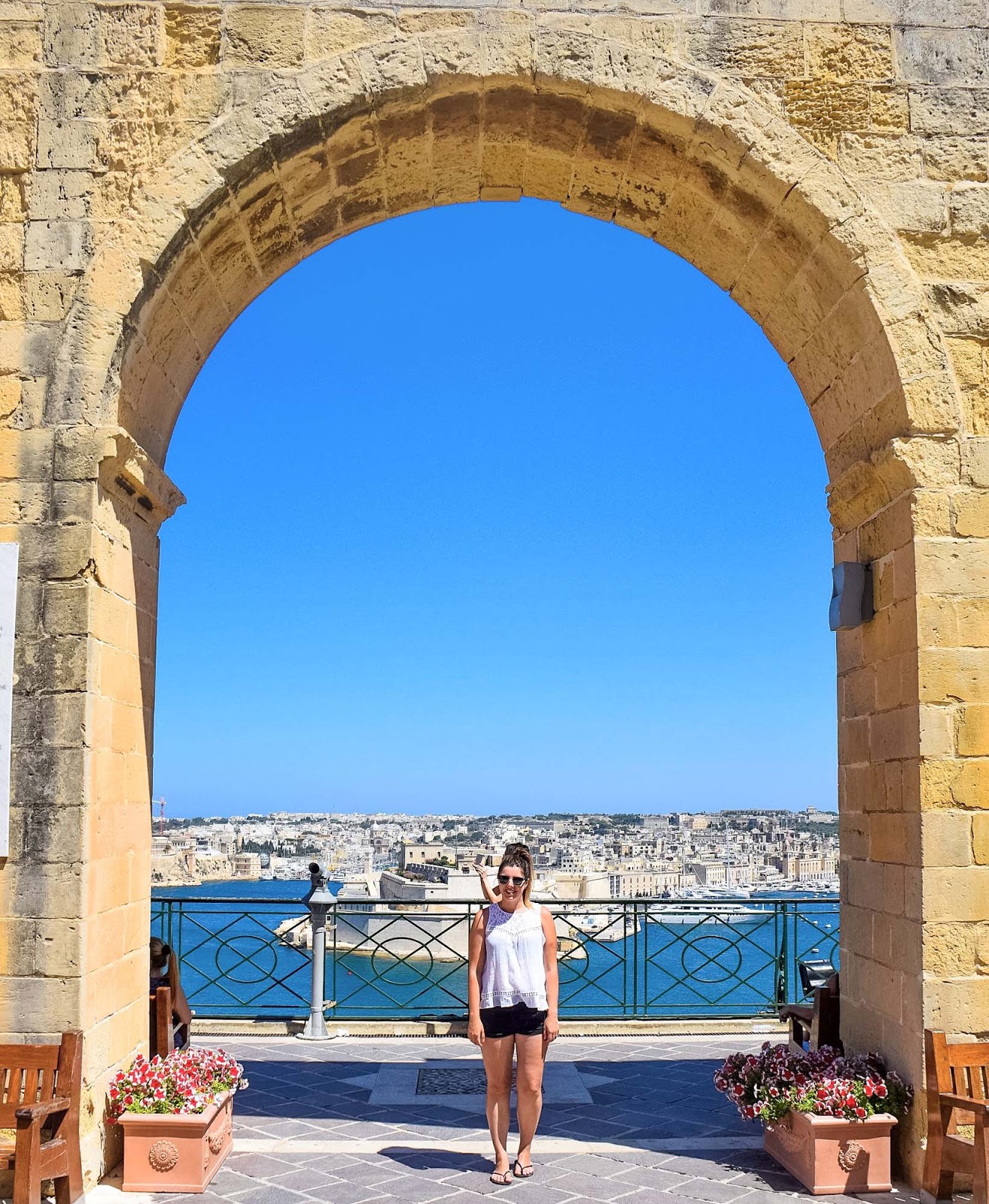 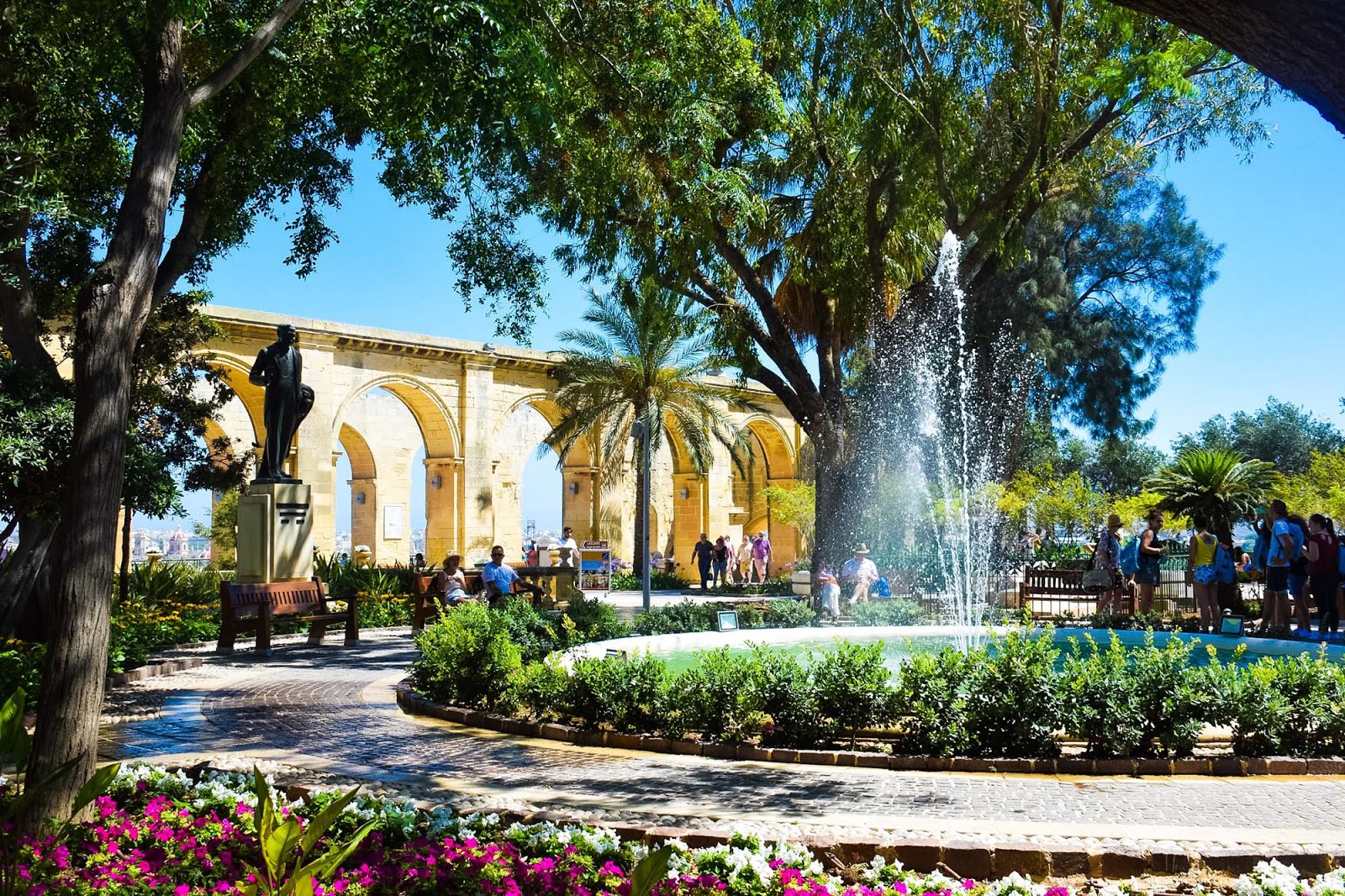 Check out the view from Upper Barrakka Gardens

One of my favourite places in the city of Valetta is Upper Barrakka Gardens. The view from the terraces in the garden overlooks the Grand Harbour as well as some of the most breathtaking panoramic views over Malta, with a unique view of the only natural harbour in the Mediterranean with the Three Cities as it’s backdrop.

It is located near the Auberge de Castuke and right next to the Malta Stock Exchange. The views here are phenomenal, and taking a moment to sit on some of the benches here and even have a chat to some of the locals is a very rewarding experience.

Surprisingly, the gardens were one of the only things I remembered about our one day trip to Malta from the last time we visited Gozo. And they were just as beautiful. 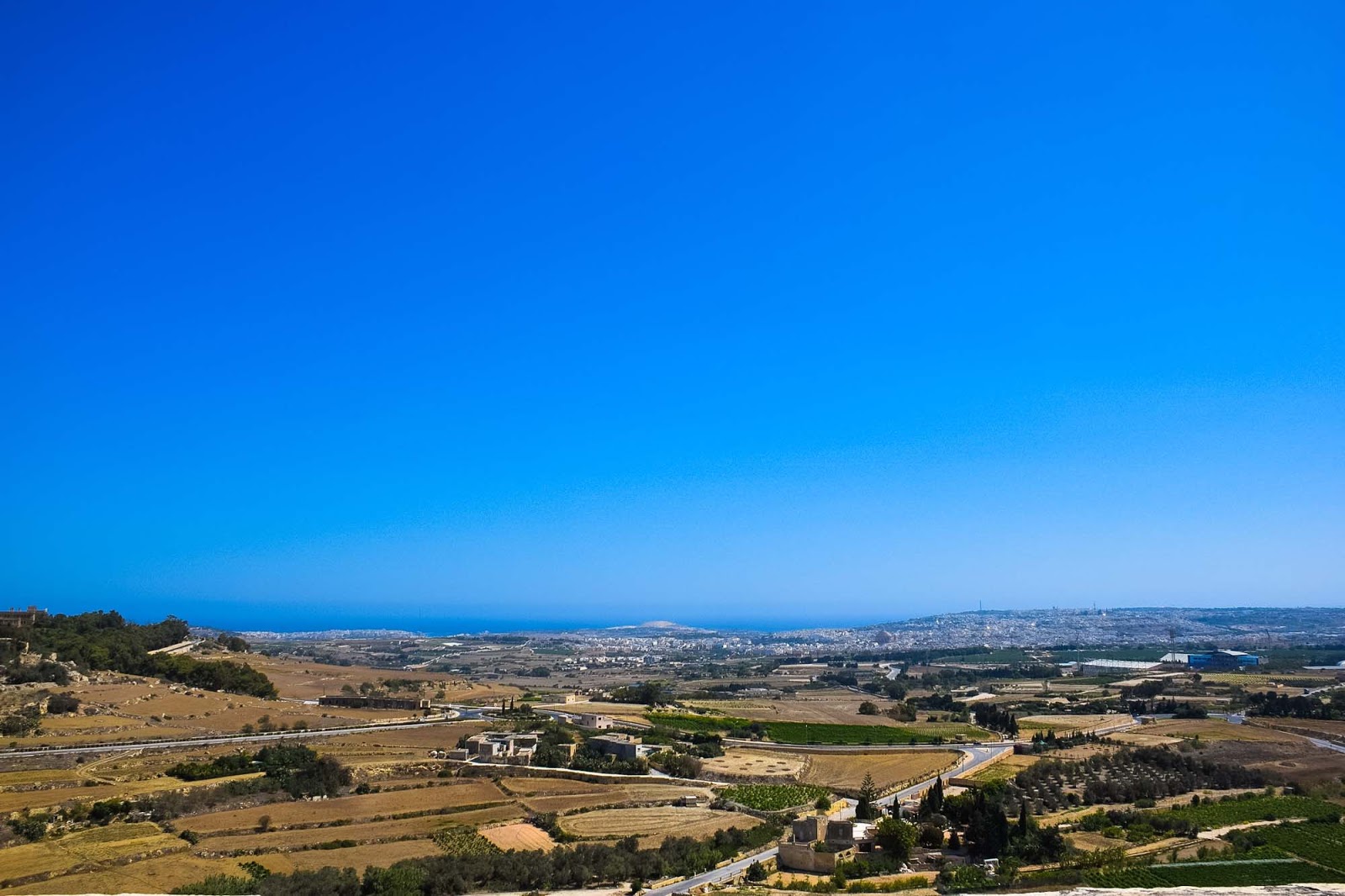 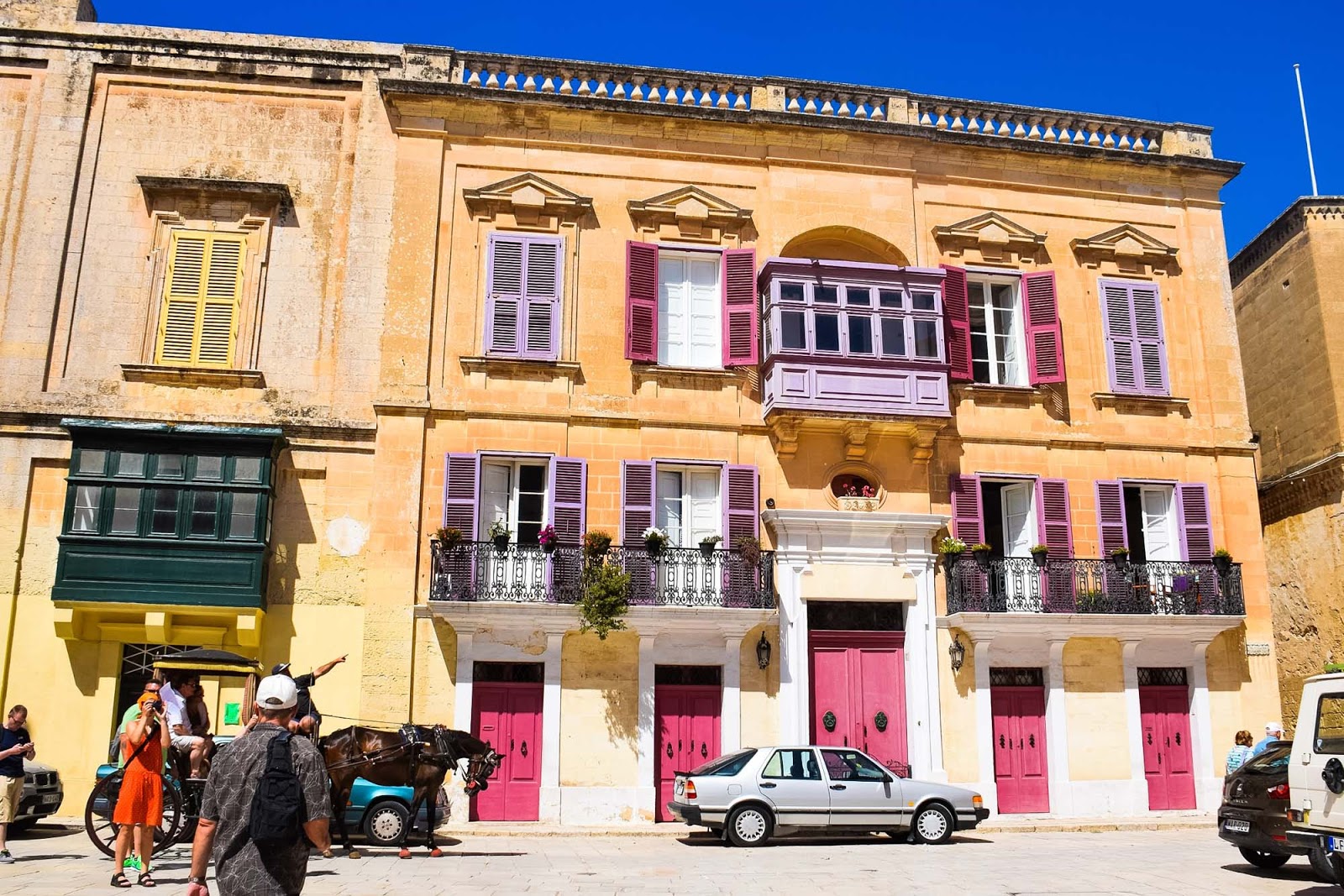 Mdina is a fortified city in the Northern region of Malta located on a large hill and known as the old capital of Malta. It was first inhabited and fortified in around 700 BC by the Phoenicians and at the time it was known as Maleth. The city benefited from it’s good location as it is the island’s highest point and is located far away from all coastlines.

This city locked inside tall walls offers an interesting perspective of what life was like during the war torn days of Malta’s history. Mdina is referred to as the ‘silent city’ by the Maltese as no cars (except for those of the very few residents of the city) have permission to enter.

There are a few horse and carts rattling around the narrow streets, but mostly you will find people exploring the city on foot. 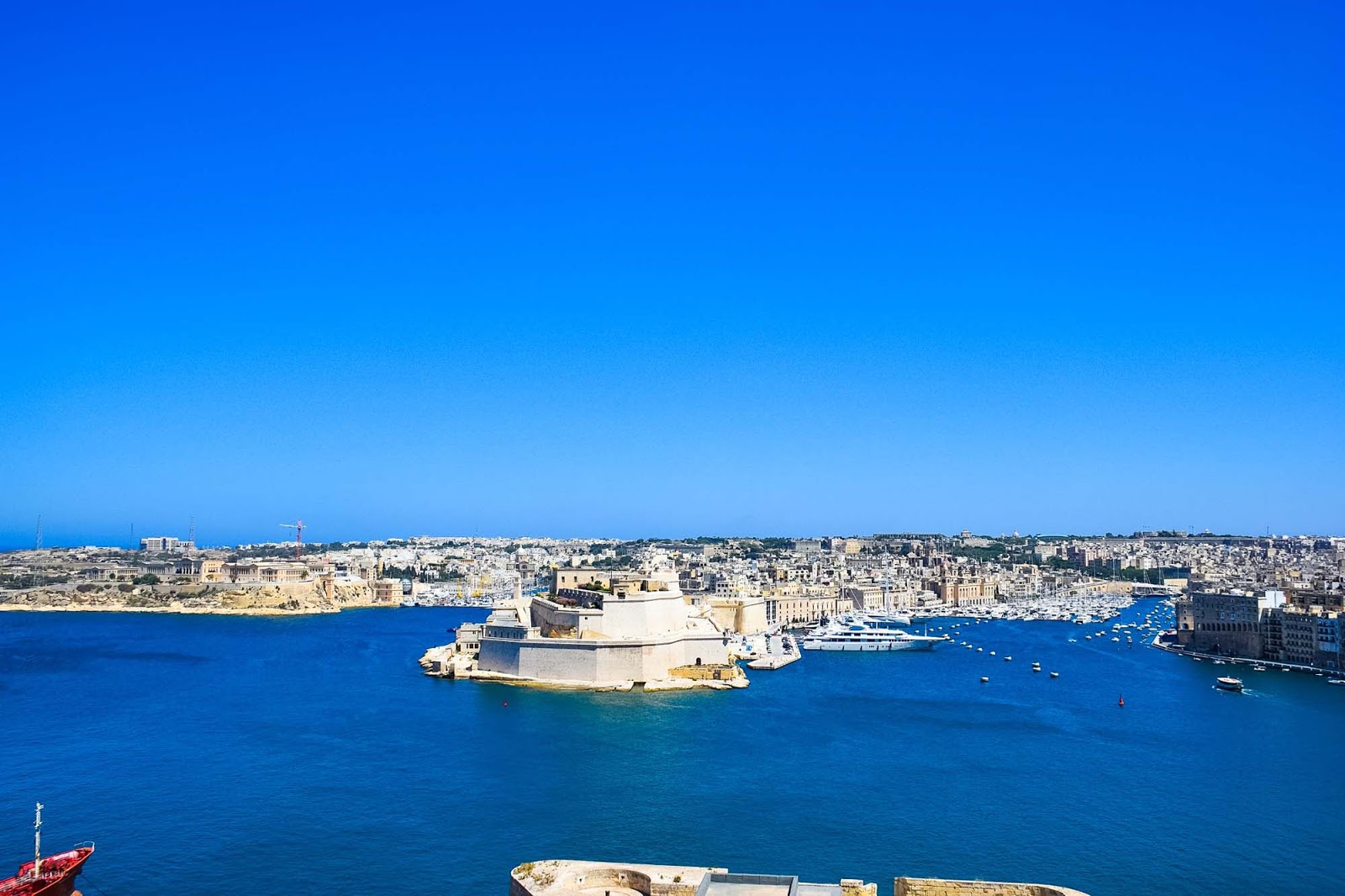 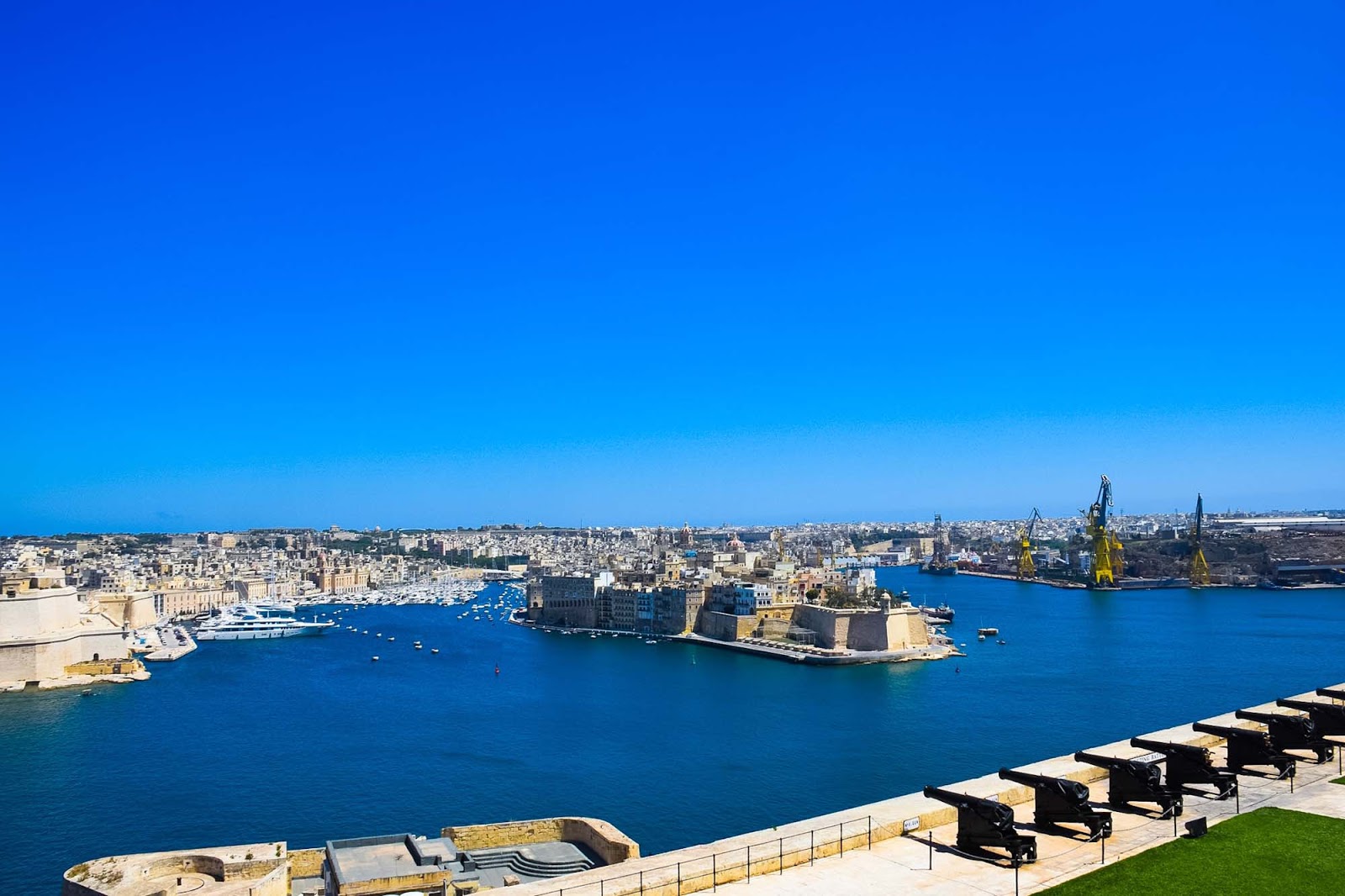 The Grand Harbour, also known as the Port of Valletta, is a natural harbour on the island of Malta which has been used since at least Roman times (maybe longer).

The stretch of water across the Harbour separates Valletta from the “Three Cities” of Vittriosa, Senglea and Cospicua. The harbour is absolutely buzzing with life every day of the year, with more and more cruise ships docking at the Grand Harbour every day.

READ MORE:
How To Have An Authentic Maltese Experience 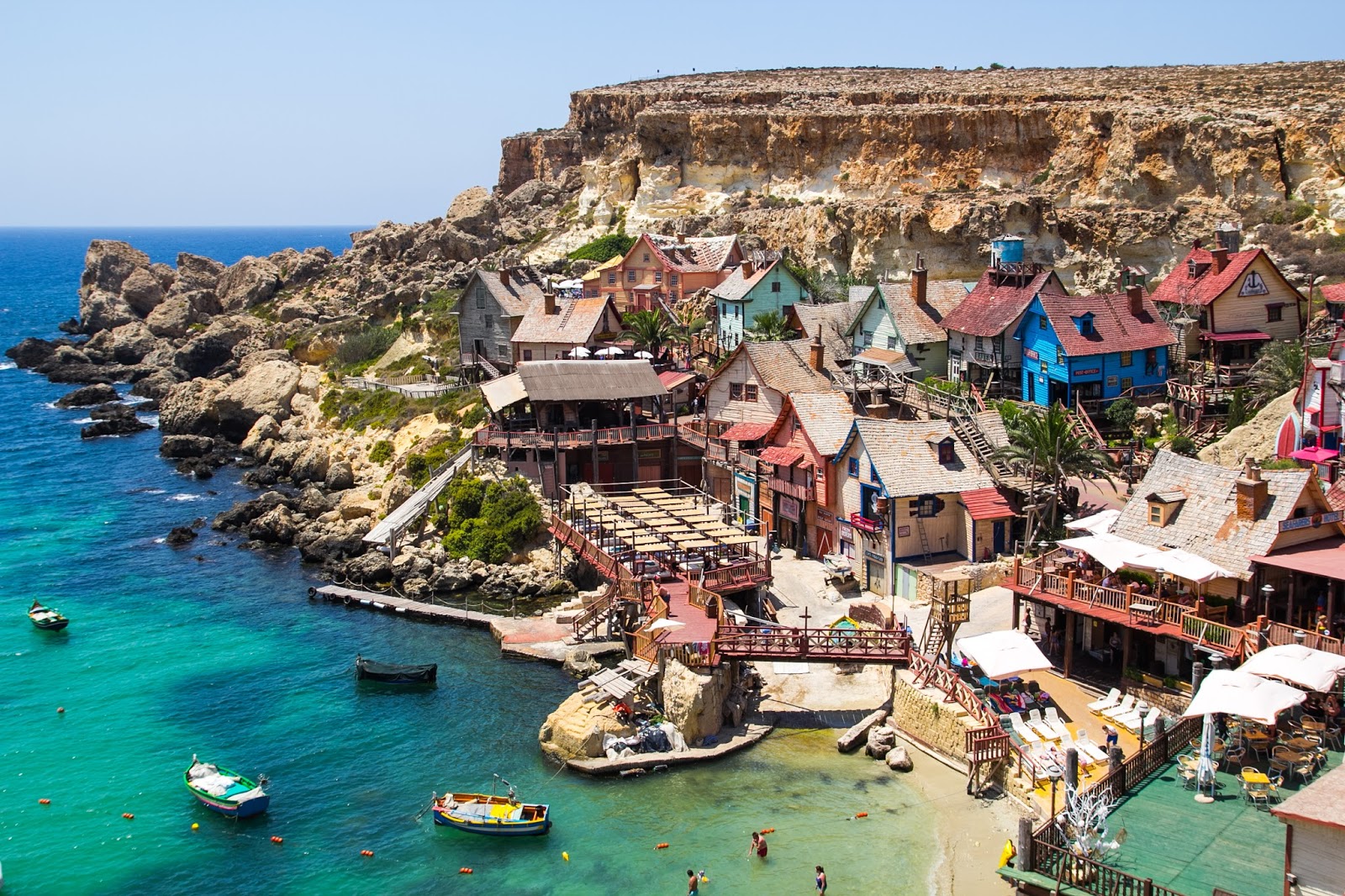 The Popeye Village at Anchor Bay on Malta was constructed in 1979 for the musical production of Popeye. This authentic wooden village was constructed out of tree trunk logs that had been shipped over from Holland, with rooftops that were imported from Canada.

The colourful little town overlooking the stunning ocean feels like it’s a world away from the rest of Malta and Europe. On arrival you will be greeted by Popeye The Sailor and his friends who will entertain you throughout your whole visit. The village includes boat rides, water trampolines, sun bathing decks, beach lido, silver smith demonstrations, Santa’s workshops where you can watch the elves preparing toys and even a winery with free wine tasting!

Today it is one of Malta’s main tourist attractions, also encouraging visitors to get out and explore more the of the country as it is almost on the other of the island to the capital city of Valletta. Above image found here. 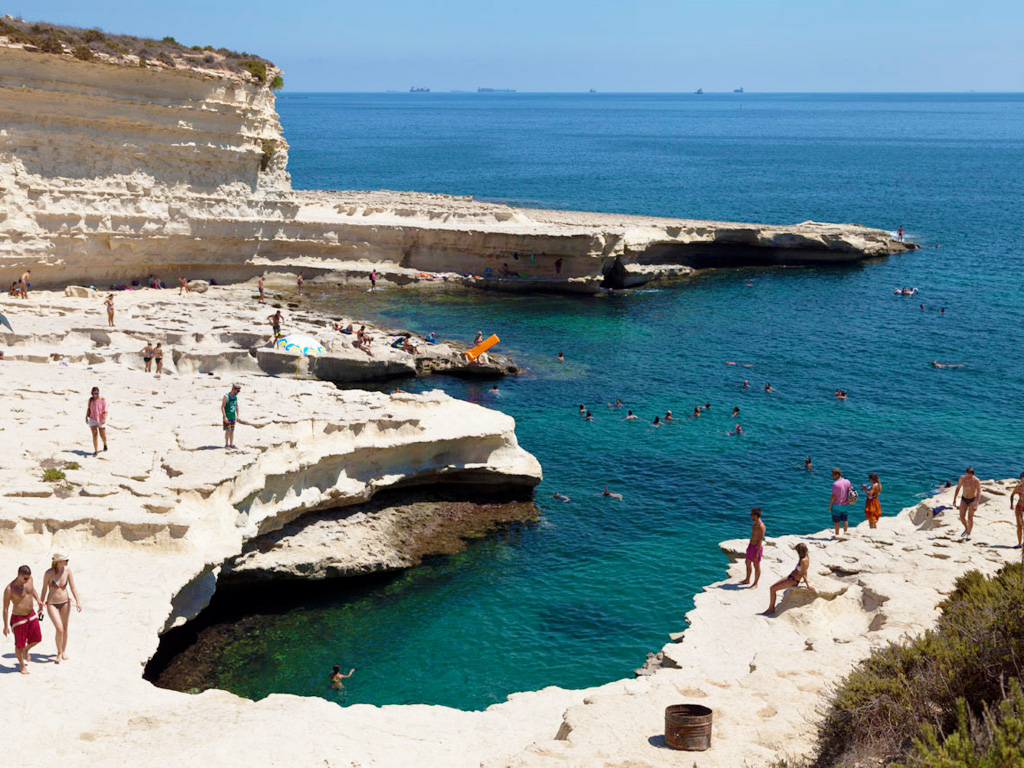 By far one of the most beautiful swimming spots in Malta (after my favourite Blue Lagoon of course) is St. Peter’s Pool.

This stunning natural swimming pool is located close to Marsaxlokk at the tip of Delimara Point in the Southwest of Malta. The flat rocks surrounding the water offer visitors the perfect place to sunbath, while the crystal clear water offers fantastic conditions for snorkelling.

Ladders are available to access the water, but for all the dare devils out there why not jump straight into the water from the surrounding rocks. Don’t be deterred by it’s remote location and the bad roads leading up to it, park on the main road and bring everything you need for the day because there is nothing at all there to purchase. If you can get past these tiny inconveniences, you’re in for a swim to remember. 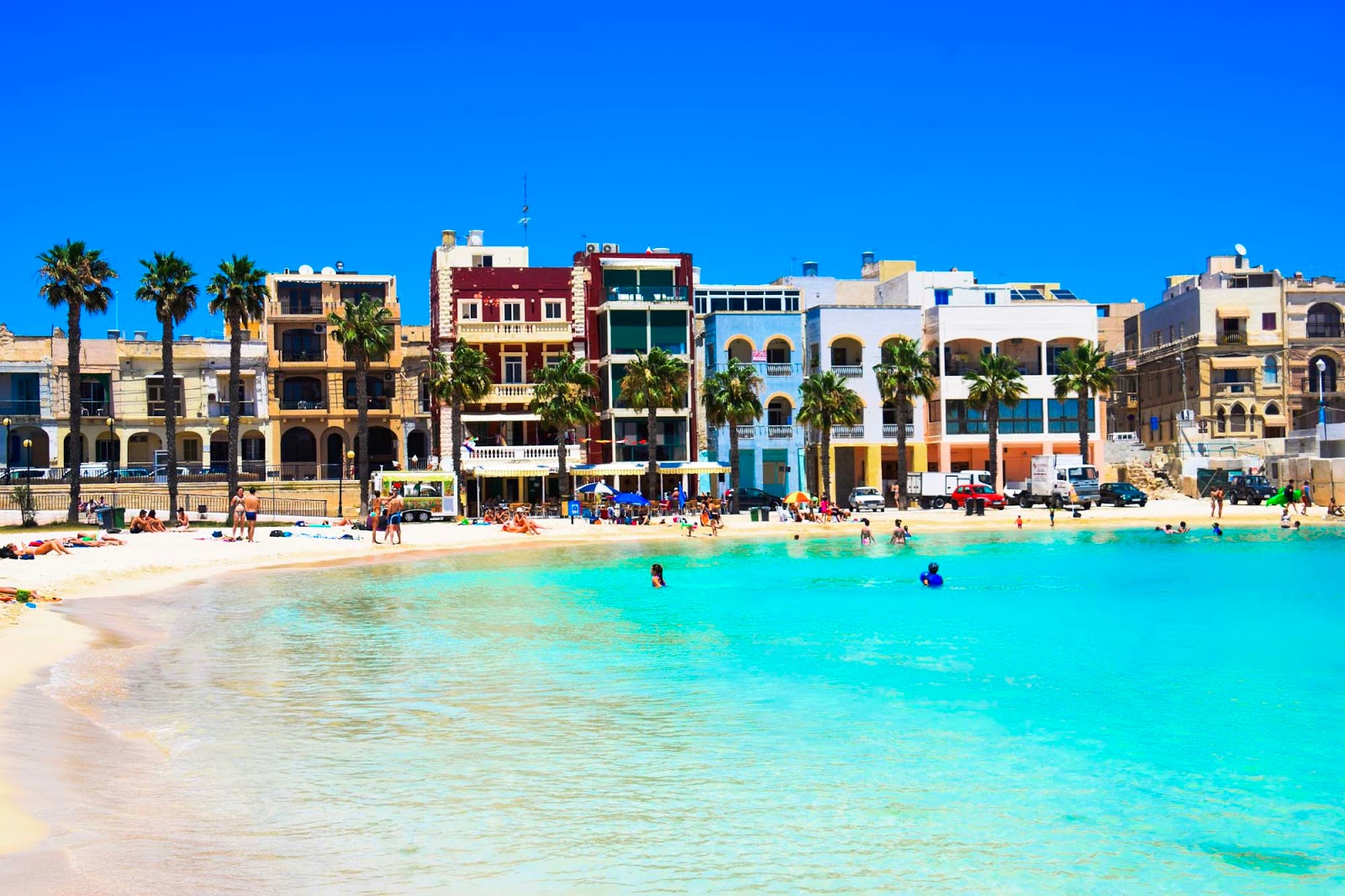 Located in Birzebbuga in the Southern part of Malta is Pretty Bay, a man made sandy beach who’s surrounding buildings are the real charm and feature. The cute houses sitting on the edge of the sand are all painted different colours and really give the bay more of a Caribbean (or even Cuban) vibe than European.

The warm water is clear and perfect for swimming, with some of the only sandy banks in Malta the perfect place for relaxing, picnicking and enjoying the summer days. Many locals have holiday houses at Pretty Bay and move out to the Bay for the summer months.

Unfortunately right in the middle of the view you will find the Malta International Freeport, but if you ignore that and focus on the overwhelming beauty of the rest of the bay you can’t be disappointed.

Book your rental car to explore more of Malta’s mainland 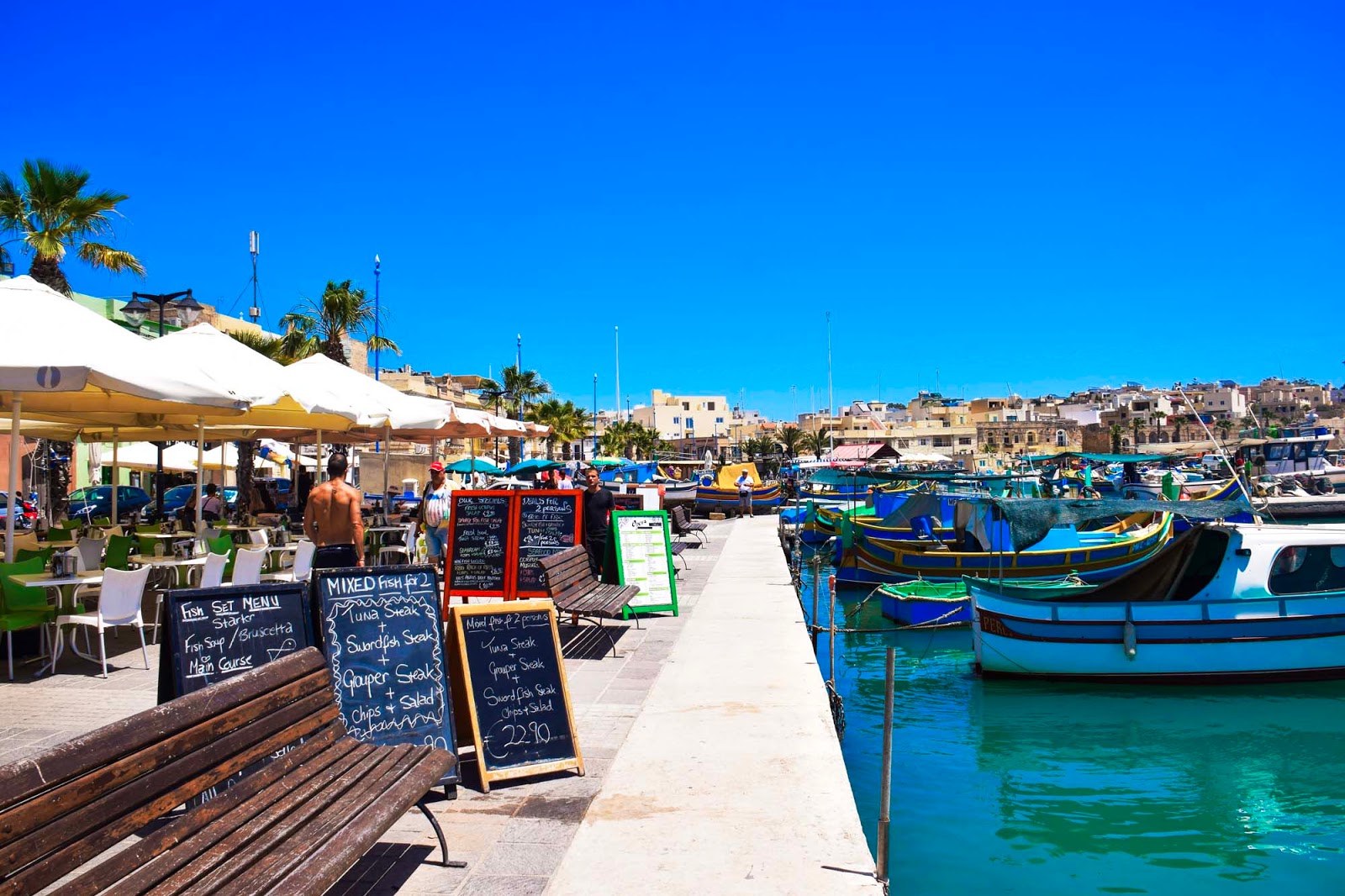 Try the seafood at Marsaxlokk

The village of Marsaxlokk is located in the southeastern part of Malta and is famous for it’s bid Sunday fish market, delicious seafood and the many decorated luzzu boats that call the bay their home.

A luzzu (pronounced lut-su in Maltese) is a traditional fishing boat from Malta that are painted in bright colours and usually have a pair of eyes on the front. These boats gave existed since ancient times and are said to protect the fisherman while at sea.

Here you will find some of the freshest seafood going round, with every restaurant offering specials and delicacies depending on what was caught that morning. Perfect place to stop for lunch and a good cocktail before continuing to explore the island.

Find the best places to stay around Marsaxlokk 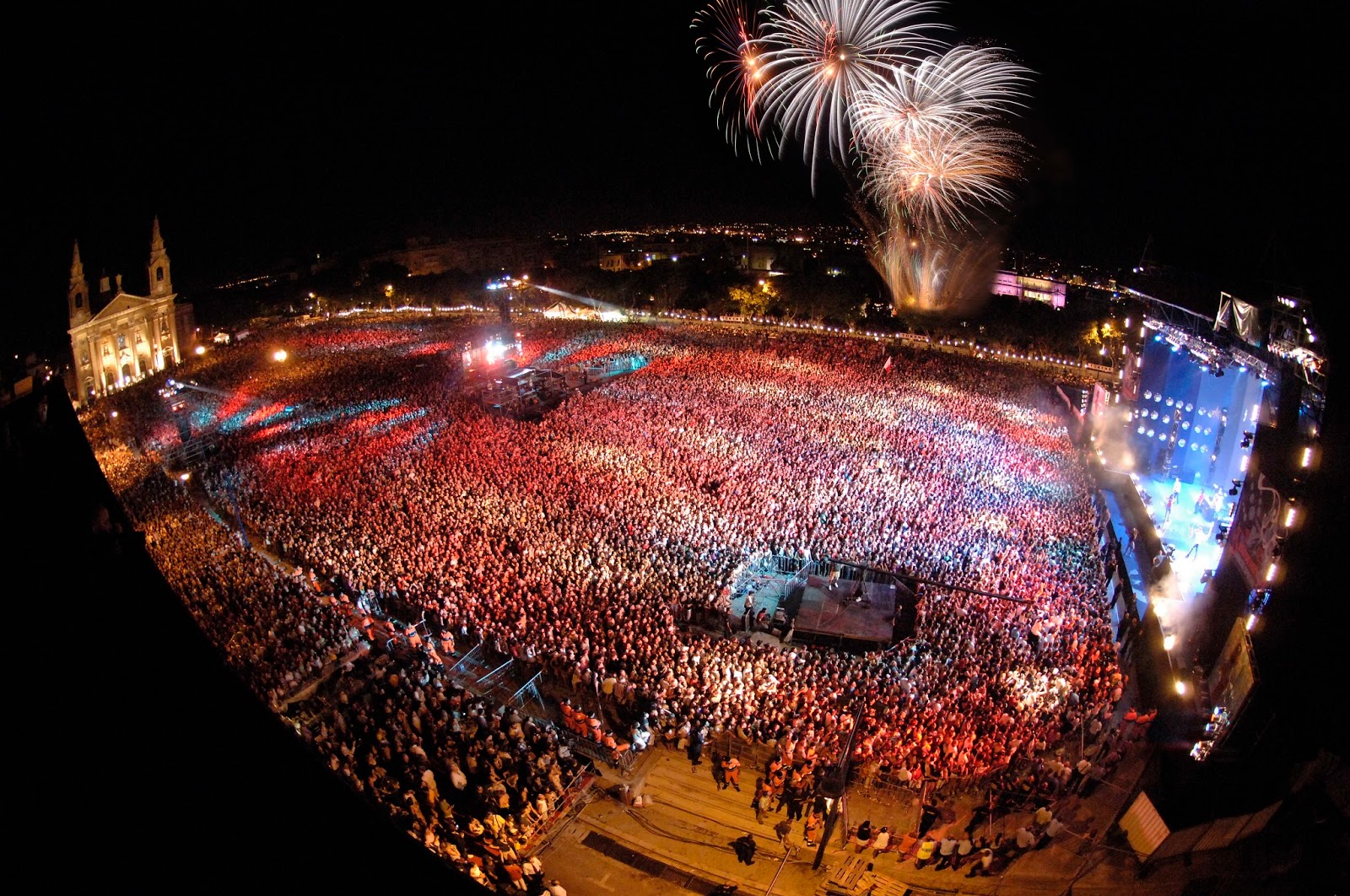 Dance up a storm at the Isle of Malta

The annual MTV music festival is held in Valletta, Malta each year and draws a massive crowd for such a tiny country. Organized by MTV Europe, this festival is one of the biggest events of the summer in Malta, attracting crowds of over 50,000 people and offering big name guests such as Wiz Khalifa, Steve Aoki, Jason Derulo, Rita Ora, Jessie J and Enrique Inglesias in the last few years.

The festival is epic and probably not what anyone would think about when planning their trip to Malta. This year the Isle of Malta will be held on the 27th of June. The festival is a free event – tickets are not required to attend. There is no age restriction within the square, but you will have to show ID to buy alcohol. Image found here.

Explore more of our adventures around Malta 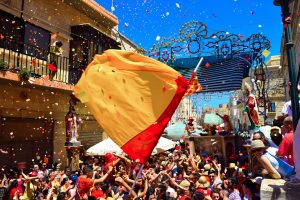 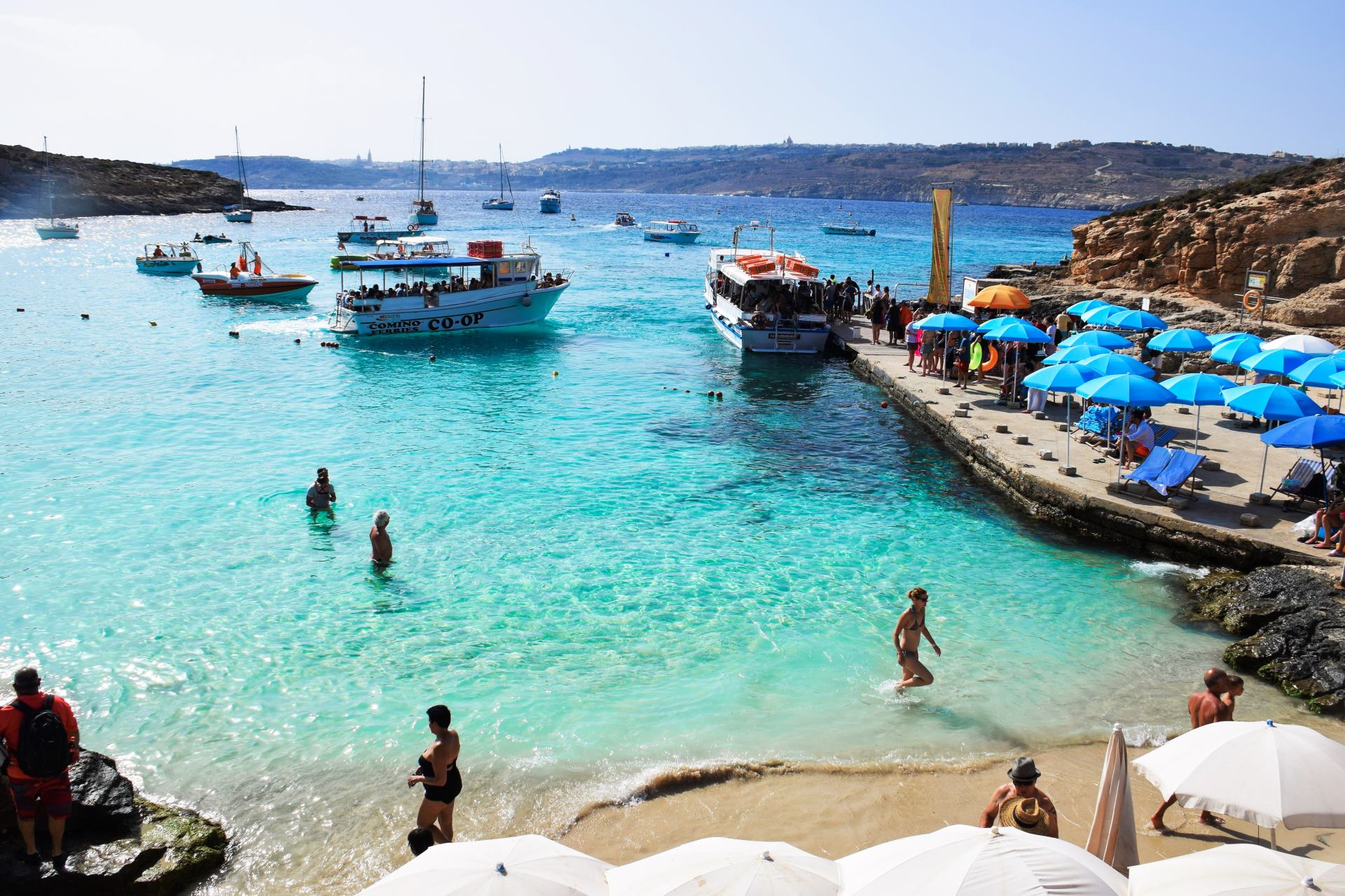 Swimming in The Blue Lagoon, Comino 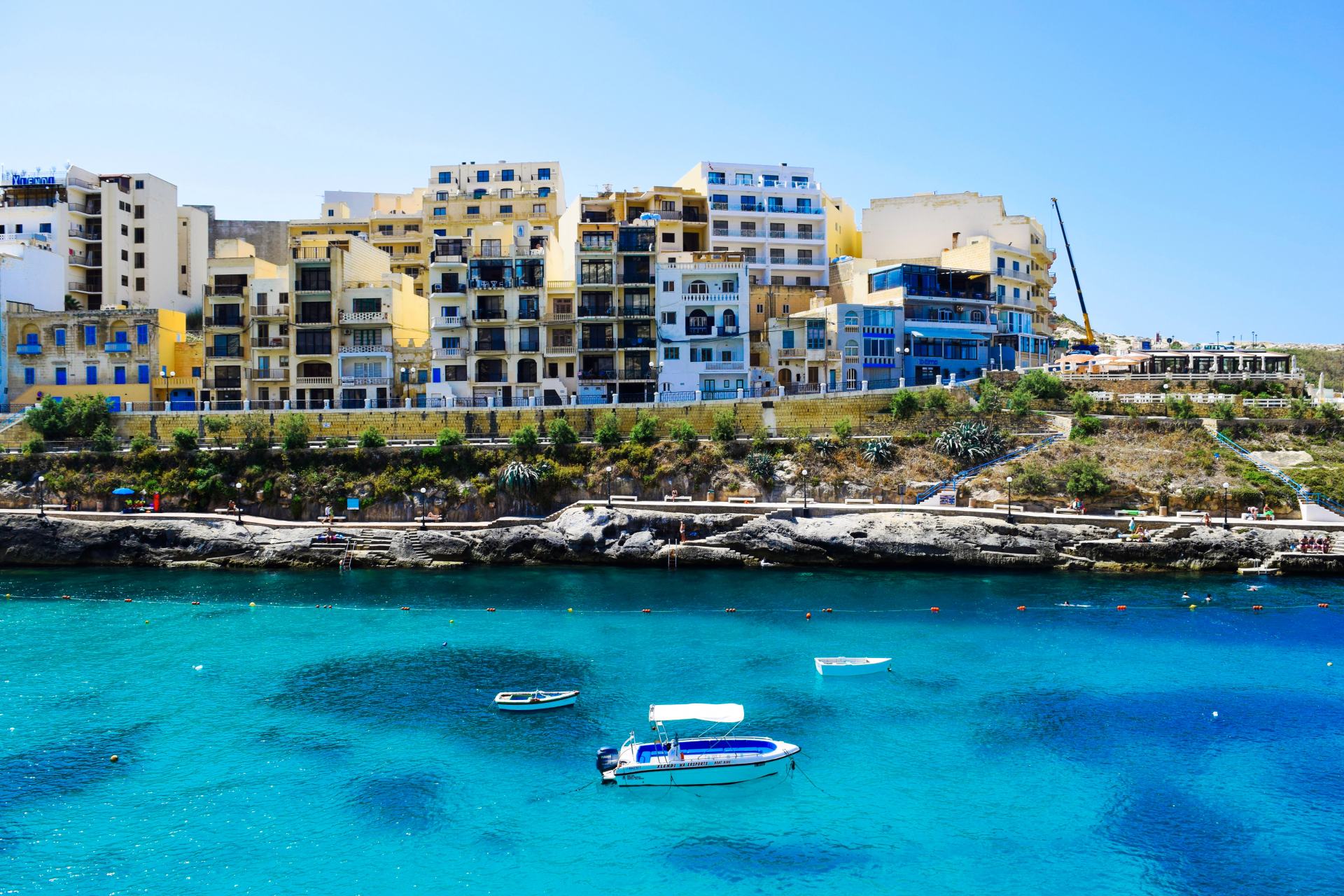 A Guide To Gozo’s Beaches