Sydney holds a special place in my heart, like a second home I have never lived in.

About once a year ( at least ) I say to Thom “that’s it, we’re moving to Sydney” when they get blessed with a 30℃ day in winter and we are shivering through 9℃ in Melbourne. Sydney is definitely one of the cities in Australia that has the weather of my dreams.

There’s so much more to Sydney than the Opera House and Harbour Bridge, it’s truly a unique, historical and exciting city, with some of Australia’s best beaches right on its doorstep. Here’s everything you need to know to plan your trip to Sydney. The only airport in Sydney is Sydney Kingford Smith Airport (SYD) which is located about 25 minutes away from the city, depending on the traffic conditions.

The airport is conveniently connected to the city with the local train system, taking just 13 minutes to reach the city centre from the airport. The Airport Link train runs every 10 minutes or so between about 4:30am and 11:30pm each day, with stations in both the domestic and international terminals of the airport.

An trip to or from the airport by train costs the regular $4.40 AUD price of a train ticket, plus the added Gate Pass which costs $14.30 AUD per person. In total a single one way ticket to the airport on the train will cost $18.70 AUD per person. For more information check out the Airport Link Website.

Alternatively, a taxi from the airport to Sydney CBD costs around $45 to $55 AUD for a one way trip. Always compare the taxi prices with the Uber prices when you land to see which gives you a better deal.

If you’re planning to explore a bit more of Sydney and New South Wales during your visit, you can also rent a car from the airport, giving you the freedom to explore as soon as you land.

Book your flights to Sydney here Sydney has some of Australia’s best weather, with hot summers and mild winters, and generally sunny days for most of the year. While summer can see some scorching temperatures to visit, it rarely hits above 40℃ in Sydney, missing out on the worst of the Aussie heat waves.

Winters in Sydney aren’t really winters at all, with temperatures staying in the low 20℃’s most of the year and rarely getting too cold or frosty.

Getting around Sydney is pretty easy with Sydney’s extensive public transport system, which connects the city with everything from the beaches to the hinterland. The transport system in Sydney uses an Opal Card, which is a free smart ticket than you can load funds on to use on the trains, buses, ferries and light rail around the city.

Trains run around the city from around 4am to midnight each day and can take you anywhere from Bondi Beach to Circular Quay and out to Kings Cross. You can connect to regional buses with your Opal Card as well to take you even further around New South Wales.

The light rail (also known as Sydney’s monorail) is a rail network in the sky, which connects some of the most central places around the city including Central Station, Paddy’s Market, Wentworth Park, Jubilee Park, the Exhibition Centre and the Convention Centre. The light rail operates every 15 minutes and takes about 25 minutes to complete the whole circuit.

For a very Sydney experience, make sure you take the Harbour City ferry around the harbour that connects the city from Circular Quay to destinations all around the harbour, including Manly Beach, Rose Bay, Taronga Zoo and Kirribilli.

It can be a little difficult to drive around Sydney as a visitor, especially due to all the one way streets and the huge amount of road works happening on King Street at the moment. However, if you’re planning to explore more of New South Wales countryside, rental cars are quite affordable and easy to rent from both the airport and the city centre.

Find the best deals on rental cars in Sydney

ATMs are widely available and credit and debit cards accepted everywhere. There’s really no specific need to carry cash anywhere in Sydney, card money can get you just about everything. Free wifi is pretty hard to come by around Australia, and it’s not any easier in the major cities. Hotels will often offer wifi, but it’s always a good idea to check whether it is completely free or if there is a charge if you want to use it in your hotel room. Generally wifi is free in hotel lobby’s and common areas, but that can also be super annoying.

Keep an eye our for free wifi signs on restaurants and cafes to make your life easier. It’s not that common for public areas to have free wifi yet, but sometimes you can find some in shopping centres. As a last resort, hit up the closest McDonalds, where the wifi is free all around the world.

The Main Areas of Sydney

When you really start getting down to the nitty gritty, Sydney is actually a pretty big city – spanning across a harbour and all the way down to the ocean in the beach side suburbs.

In the city Kings Cross is considered the centre of the city and is where you can find lots of hostels and cheap accommodation options. It’s right near one of the biggest train station and within walking distance of lots of bars and restaurants.

Near the harbour Circular Quay is one of the highlights of the city and is where you can find landmarks such as the Sydney Opera House, Sydney Harbour Bridge, the botanical gardens and the historical area of the Rockies along the water.

Heading out of the city Bondi Beach is one of the most famous suburbs in Australia and is home to one of the country’s favourite beaches. The surrounding suburbs of Bronte, Coogee, Tamarama and Gordon’s Bay are all also worth a visit and are beautiful areas to stay.

One the other side of the harbour, Manly is another favourite for both tourists and locals. Coastal walks in the area show you some of the cities prettiest hidden gems, while the Corso walkway from the ferry to the beach is full of good restaurants, cute bars and shopping options.

Best Time To Go To Sydney

Between the months of October to April, when the sun is shining and the weather is warmer is generally the best time to visit Sydney. Avoid Australian school holidays if you can, as crowds surge during the summer with people from all over the country coming to visit Sydney.

Sydney generally has warm pleasant weather all year round though, so it’s not uncommon to find yourself having a beach day in the winter time. There really isn’t a bad time to visit.

Check out the best places to stay in Sydney + Meet the famous lifeguards dressed in blue at Bondi Beach, but make sure you swim safely so you don’t end up on an episode of Bondi Rescue
+ Climb the Sydney Harbour Bridge – or if heights aren’t your thing there is a pedestrian lane you can walk across on the road
+ Make friends at the Toronga Zoo
+ Take the ferry across to Manly Beach for a laid out beach vibe only half an hour from the CBD
+ Take the Bondi to Coogee Coastal Walk for some epic views and beautiful landscapes while getting a workout
+ Visit the Rocks Historical District to see some of Sydney’s oldest buildings and their stunning architecture
+ Catch a show at the Sydney Opera House, or just take pictures out the front
+ Explore Circular Quay & Darling Harbour, there’s always so much going on
+ Check out the perfect view of both the Opera House and Harbour Bridge at Mrs Macquarie’s Chair

Good to know for your visit to Sydney

Sydney’s city centre can be very difficult to drive in, with one way streets all over the place and toll roads that run right through the city.

Recently there has also been road closures and detours due to construction and road works right in the heart of the CBD.

Make sure you’re aware of where you’re driving, have your maps loaded up and are confident driving in heavy traffic situations before you leave to avoid confusion along the way.

There are also a large number of toll roads around the city. To avoid fines and extra payments to the rental car companies take note of the tolls and make sure you pay them all before you return your car.

Explore more of our adventures around New South Wales 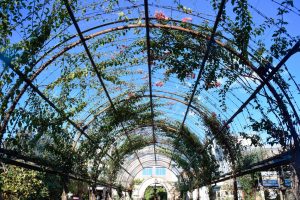 The Sydney Series: The Grounds Of Alexandria 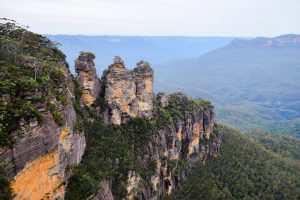 What To Do In Blue Mountains National Park 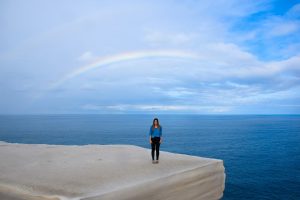 How To Get To Wedding Cake Rock in Royal National Park