Did you know that you can see orca whales in Australia?

We will forgive you if you didn’t, we certainly didn’t know you could do it on a specialised tour with guaranteed sightings! We always just thought that orca whales would pass by the Australian coastlines, way too far out into the deep ocean to be seen from the mainland. And then we heard about Whale Watch Western Australia.

Whale Watch Western Australia are a family run business who run year round whale watching expeditions off the coast of Western Australia. They follow the natural movement of the whales, with tours departing from Perth, Bremer Bay and Augusta throughout the year and spotting all kinds of whales on their tours.

From January to March each year, they are operating out of Bremer Bay and taking their guests out to see the amazing orca whales that reside in Bremer Canyon. As soon as we heard about their tours we knew we had to check it out while we were visiting South West WA. We boarded our tour just before 8am, ready for a full day out at sea. Most tours to see the orca whales go for about eight hours, with some variations depending on the whale activity on the day of your tour. The boat you board is absolutely beautiful, a very comfortable boat for your day on the sea, and is the largest and most luxurious purpose built whale watching vessel in WA.

Known as the MV Steep Point it has five huge viewing decks over three levels, which means you always have room to move around and find your own bit of space throughout the day. It also has a luxury Captain’s Lounge upstairs, where you can sit indoors with the Captain and crew, as well as their cute little English Staffy who comes along on all the tours. He knows the waters better than anyone (just watch him when you stop to check out the seals on the way back). This boat is exactly what you need to navigate out to the waters of Bremer Canyon. It took us just over an hour to get from the marina to the canyon (almost half the time of the other tour companies), and before we knew it there were orca whales all around us.

Helpful tip: The back deck on the lower floor of the boat has comfy beanbags for you to sit in, and is one of the best places to base yourself if you’re feeling a little sea sick.

Once we were out at sea the crew started a live commentary that lasted for the whole day. It was fantastic. They told us about the orca pods that were around us, the whales that they recognised and tracked regularly, what side of the boat we could get the best view of the whales, what their behaviour meant and what they were doing as they moved along side us. It gives you such a great insight and context to what you’re seeing so you can understand the behaviour of these majestic animals. Our day out on the ocean with Whale Watch Western Australia was amazing. We couldn’t believe it but we saw more than 100 individual orca whales. For a few hours we followed a pod of more than 25 whales who were hunting – travelling along the surface for a few minutes and then diving down for about seven minutes at a time to try and find food for the pod to eat.

Also known as Killer Whales, this is a really beautiful species of whale, extremely smart and the largest of the oceanic dolphin family. The largest males can measure up to six to eight metres in length and weigh more than six tonnes, with full sized females slightly smaller.

We followed many different pods throughout the day. Watching them as they hunted and socialised. We even saw a nursery pod, where a female whale looks after some of the younger whales while the rest of the pod were hunting. It was just such a special day out on the ocean.

Whale Watching Western Australia also had a buffet on board all day where you could help yourself to any food you might want. They had hot food (like party pies, sausage rolls, and quiches), a make your own sandwich/wrap/roll bar with all kinds of ingredients, fruit, snacks and drinks, available for you to grab all day. Such a great idea – you could head to the bar whenever you wanted to grab yourself a snack or a larger meal, which meant you never missed out throughout the day. The Whale Watch Western Australia orca tour takes you out to the intersection of Bremer Canyon, Hood Canyon, Henry Canyon and Knob Canyon, an area of the Continental Shelf that is known as The Patch. It is home to the largest congregation of orcas in the Southern Hemisphere, who come here to hunt and feed.

This feeding ground is the reason why orca whale sightings are guaranteed on these tours. During the summer time orca whales come here predominately to feed on giant squid that come to the area, however we also saw them feeding on salmon during our visit to the canyon.

Orcas are at the top of the food chain out here, and it doesn’t help that they are so incredibly smart and work as a pod to take down other animals. In recent years that have been said to be killing dolphins and it has even been recorded that they took down a Blue Whale as a group to feed. Proving once and for all that you don’t need to be the biggest to be the top of the food chain. A note about seasickness

Whether you are prone to sea sickness or not, we would highly recommend that you take some travel sickness tablets before you set off on an Orca Whale Watching tour. Please read the instructions on the medication, and consult a pharmacist or doctor if you need to, but it’s recommended that you take motion sickness tablets the night prior and on the morning of the tour.

This tour goes deep into the ocean canyons. Where you will experience the type of movement where you lose sight of the horizon amongst the swells. Thom and I both got very sea sick on this tour, despite never having been motion sick before in our lives. I had originally planned to get us some motion sickness tablets for the trip, but was still getting used to the trading hours in WA and completely missed the pharmacy.

That being said, many people on the tour get sea sick and the staff on-board are exceptional at dealing with it. There is an abundance of travel sickness bags on the boat (grab a couple when you see them and put them in your pocket for safety). They will immediately come over to you if they see you are unwell, bringing tissues and a new travel sick bag, and taking away the old one. Having never been sea sick before we really felt terrible about this. Who wants to hand someone a bag of their vomit? But they are so used it, discreet about it, and they make you feel so much better.

A HUGE shout out to Laia on our tour, who helped us out several times when we were just not in a good state. When we visited Canada last year we hopped on an orca whale watching tour in Vancouver. They also offered guaranteed sightings on their tours. On the day we spotted three whales who were travelling – which means they pretty much swam really fast through the ocean and you mostly just saw their fins going past and the occasional pop out of the water. We thought this was amazing, how incredible, we thought, to have seen three wild orca whales.

That was absolutely nothing compared to our day with Whale Watching Western Australia. Spotting more than 100 orca whales, swimming alongside them as part of their pod, and having them naturally come up to the boat and curiously check us out was absolutely amazing. We could not recommend this tour highly enough and it is a can’t miss experience for any killer whale lovers visiting this region of Australia. Explore more of our adventures around Australia

Thank you to Whale Watching Western Australia for inviting us to experience the orca whale watching tour as their guests. All opinions are, as always, our own. 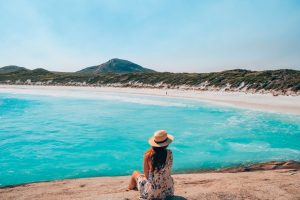 10 Best Beaches in Esperance You Don’t Want to Miss 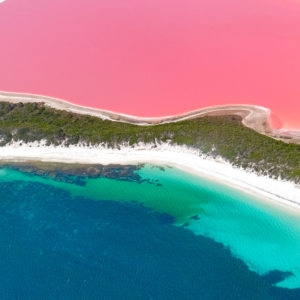 A Scenic Flight Over The Pink Lake In Esperance 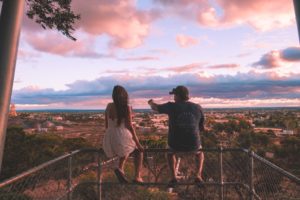 A Guide To The Best Things To Do In Kalgoorlie