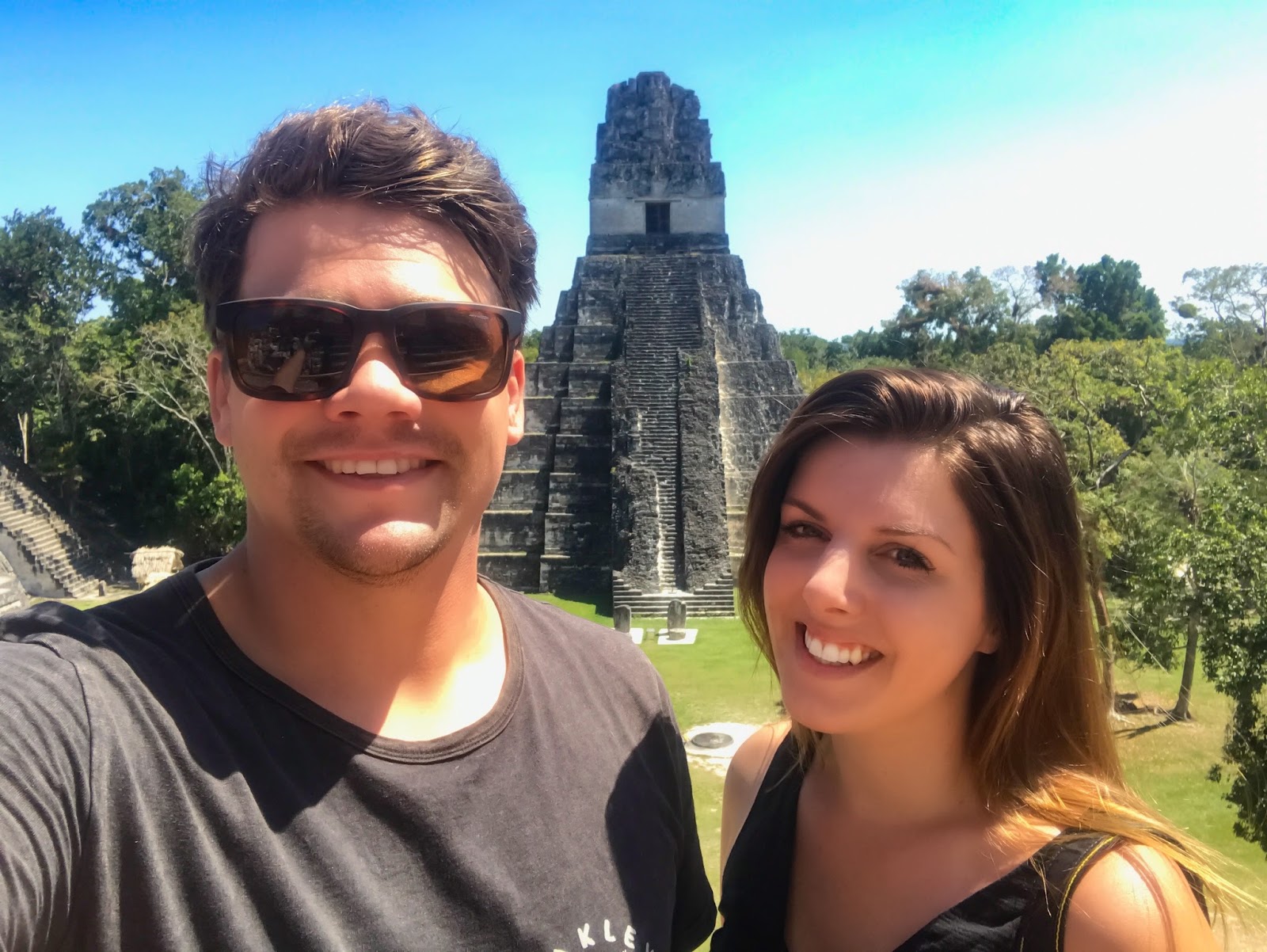 I’m not even sure where to start when it comes to writing about our trip to Tikal National Park, in the Petén region of Northern Guatemala.

It was completely different to any other Mayan site we had visited in Central America, and a huge day of touring. It could have been the massive jungle surrounding the ancient city, or the sounds of monkeys chattering to each other in the trees, but I think the main reason that Tikal is so surreal is the absolute feeling of peace and calm, and lack of crowds around the park.

Spread over a huge amount of land and hidden amongst the flora and fauna of the National Park, it’s easy to see why Tikal has been declared a UNESCO World Heritage Site. 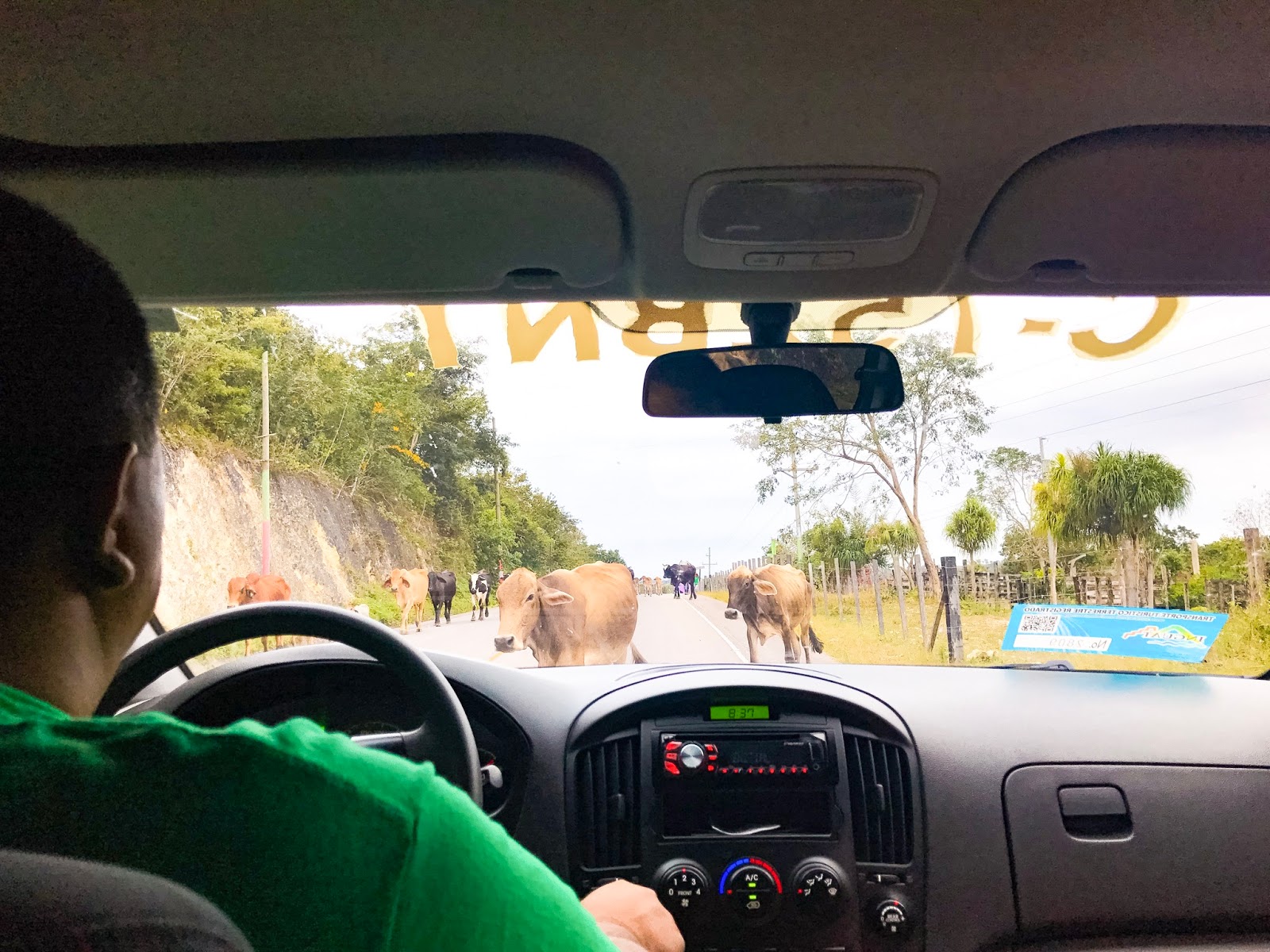 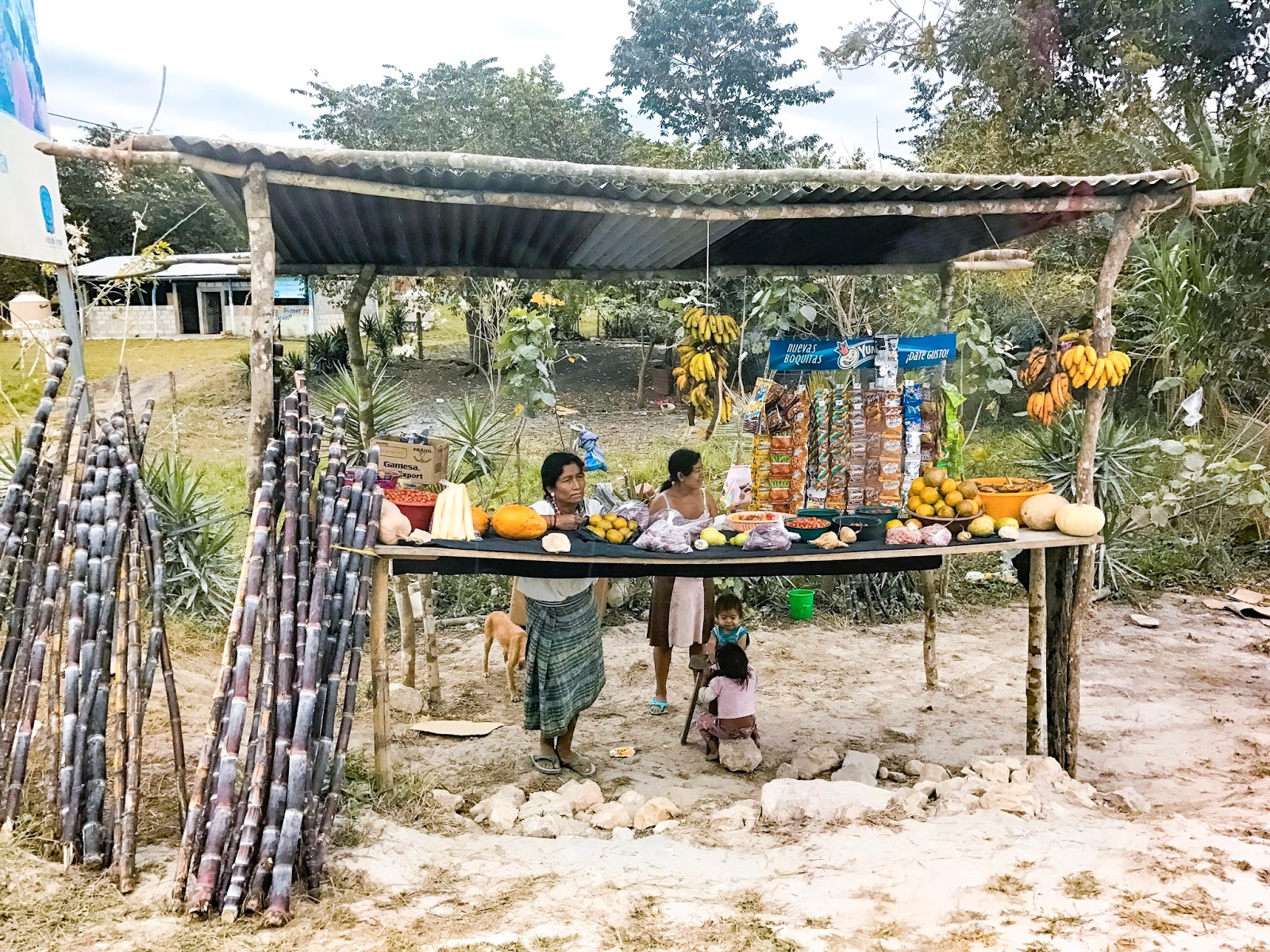 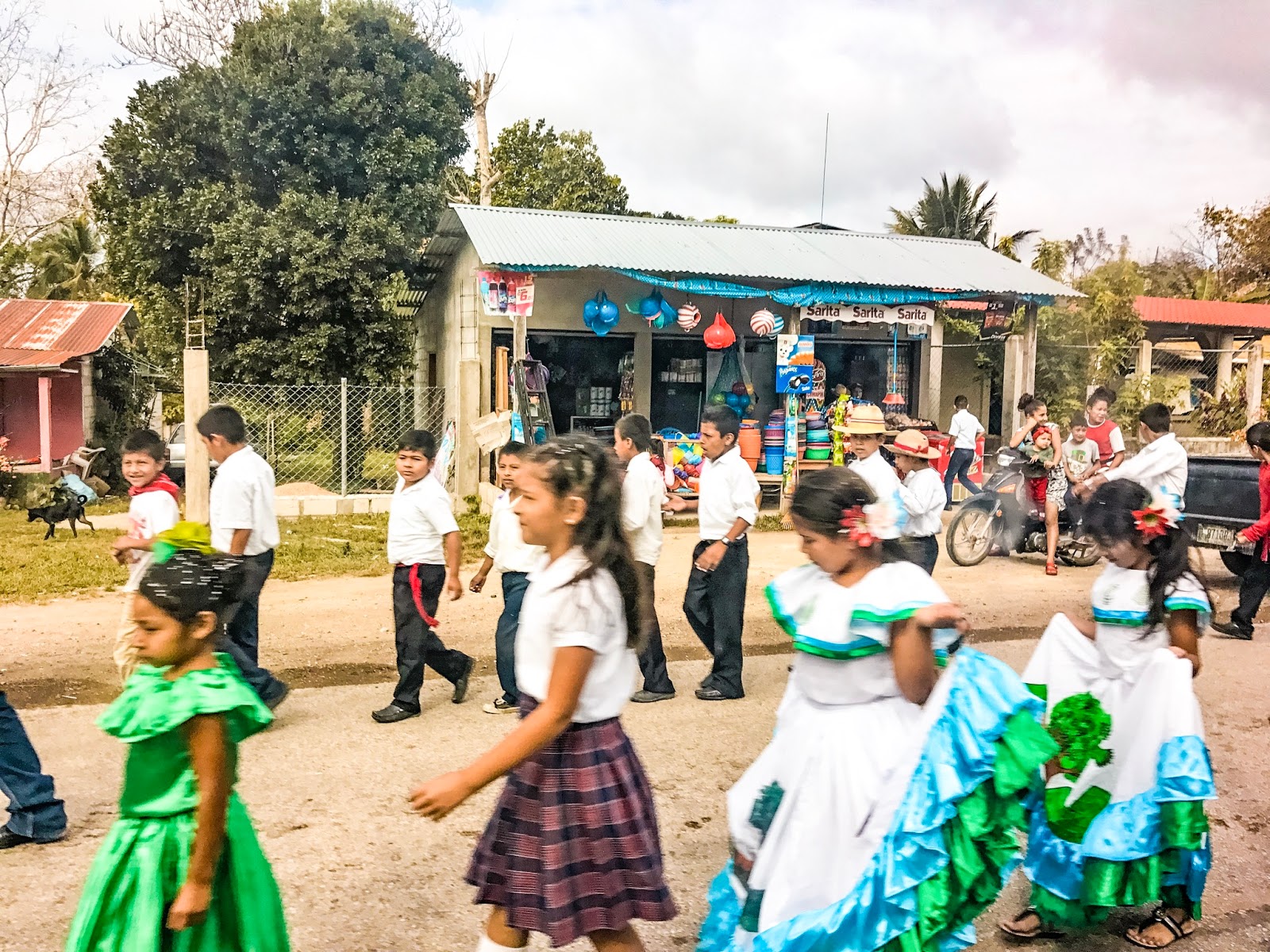 Getting to Tikal National Park

Our Tikal day tour started bright and early, with a 6:30am pick up time from our hotel in San Ignacio, Belize. The drive from San Ignacio to Tikal was expected to be about 2 hours long, with a boarder crossing into Guatemala as well, so it was a good idea to start so early!

We had booked our tour with Pacz Tours and our tour pretty much started from the minute we jumped into the van. Our guide couldn’t wait to start pointing out the highlights of the drive in both Belize and Guatemala.

He had been taking tours through Guatemala and Tikal for over 20 years, so you could definitely say he had some knowledge about the local area. He stopped at a few different places on the way to the National Park to show us local sites and explain traditions of the Guatemalan people. 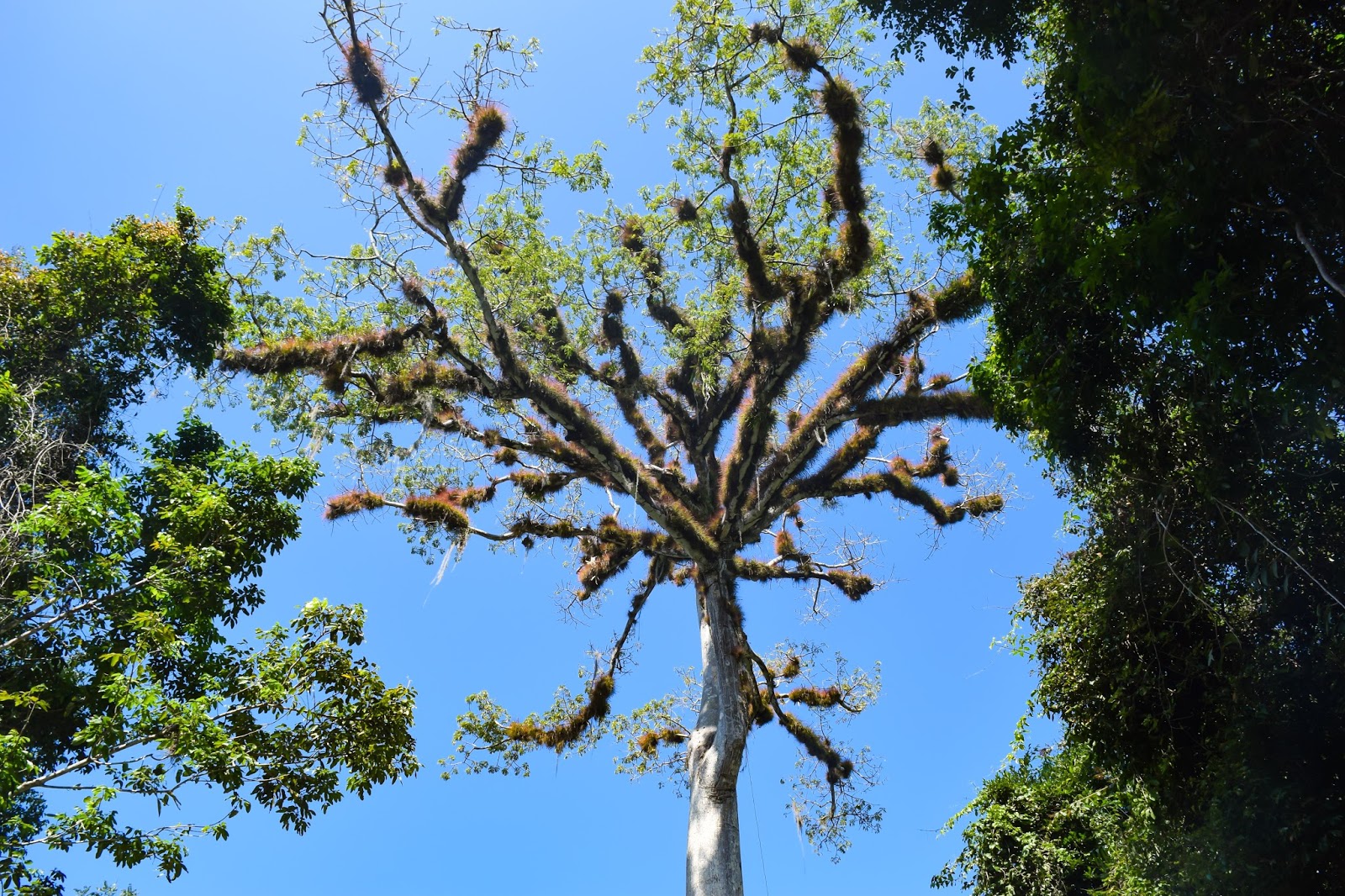 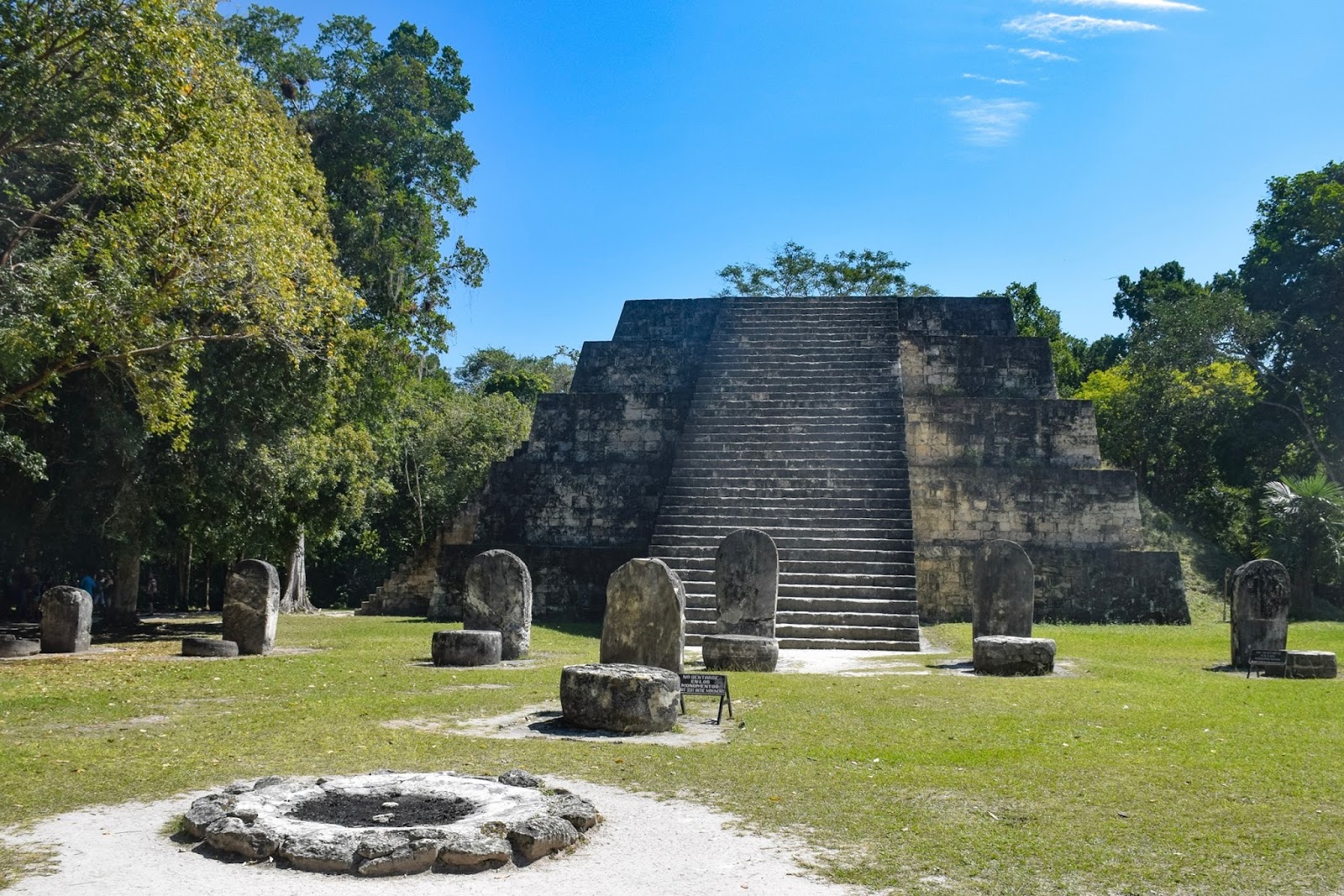 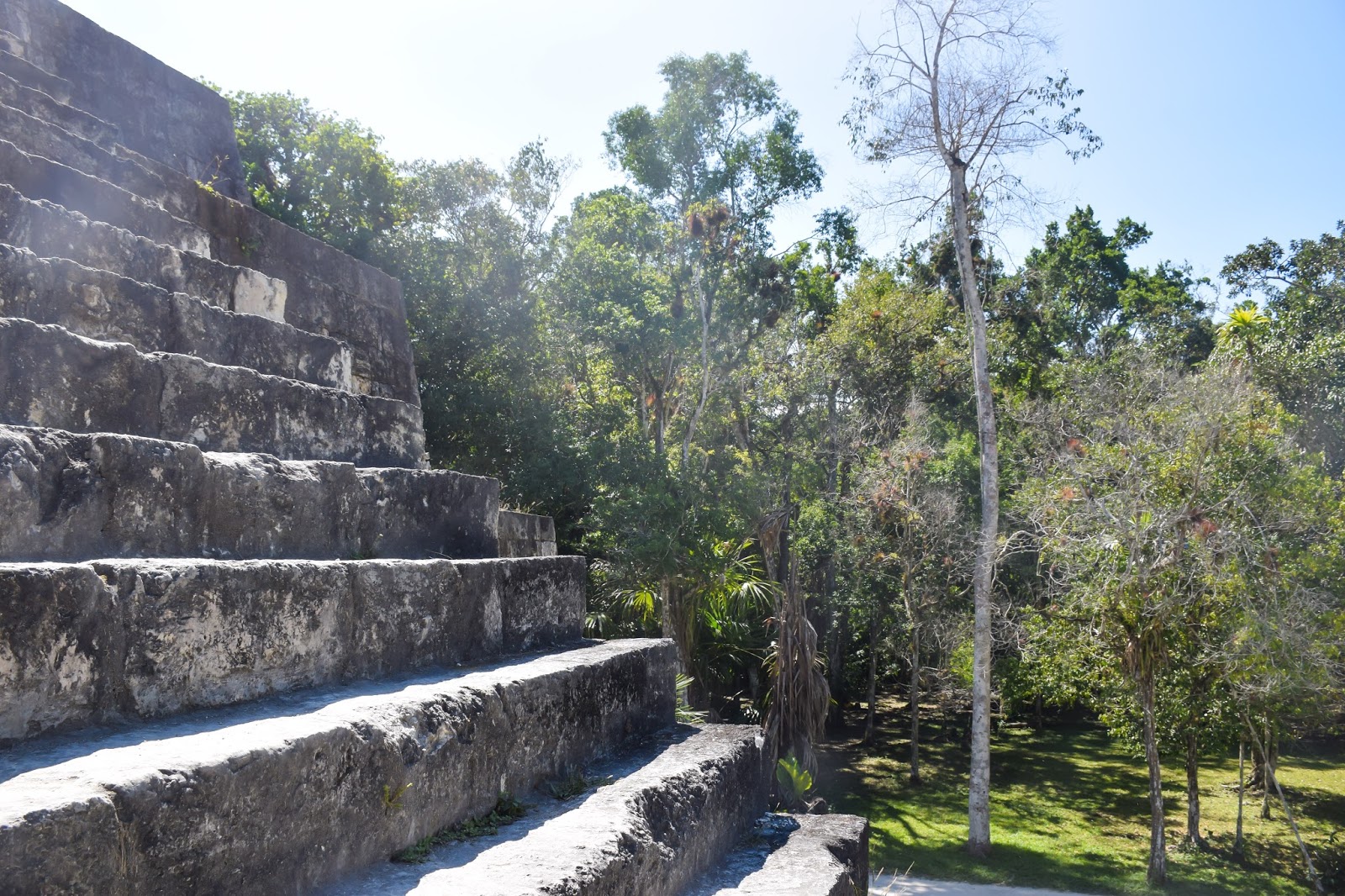 By the time we arrived at the National Park the sun had well and truly risen (yay, goodbye clouds!), and it was definitely getting HOT. Our driver dropped us off at the entrance and we began our day exploring the park.

During the peak of the Mayan Empire, Tikal was a very important and influential city, controlling much of the territory and dominating smaller city-states. It began to decline in the late 800s A.D., before it was eventually abandoned like many of the other famous Mayan sites around Central America.

Consisting of nine different plazas and courts, and cleverly connected by causeways and ramps, Tikal has a total of about 3,000 structures, spread over a massive 15 kilometres. During it’s busiest period, researchers have estimated that about 11,000 people lived in the city centre of Tikal with another 40,000 living in the surrounding areas.

When you are walking around these miniature cities within the park it is just unbelievable to think that so many people lived in not only such a small space, but so few actual buildings.

Our guide told us that most of the people living in Tikal lived in small huts and tents, with only Royals and people in high power living in the actual buildings. 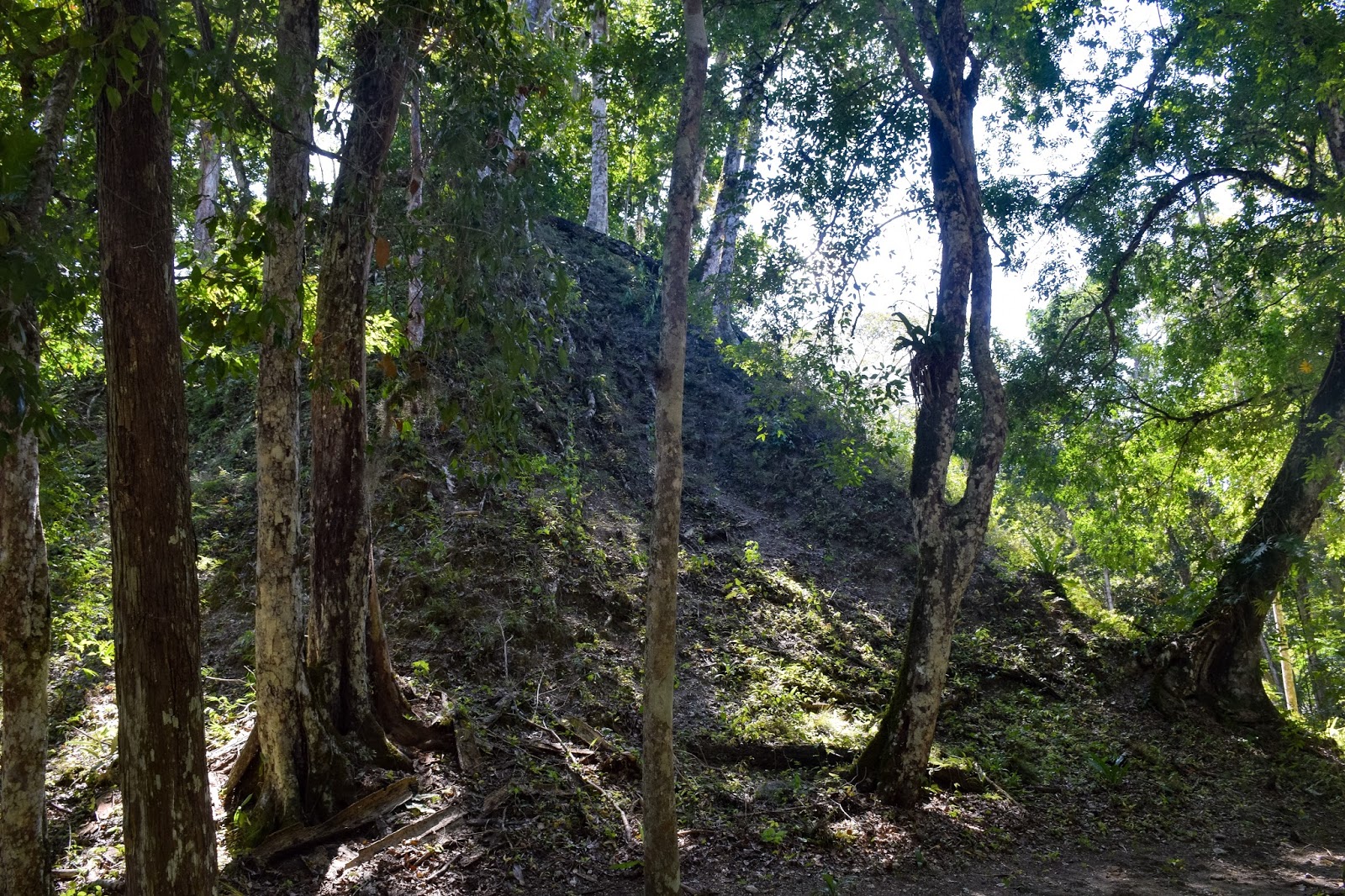 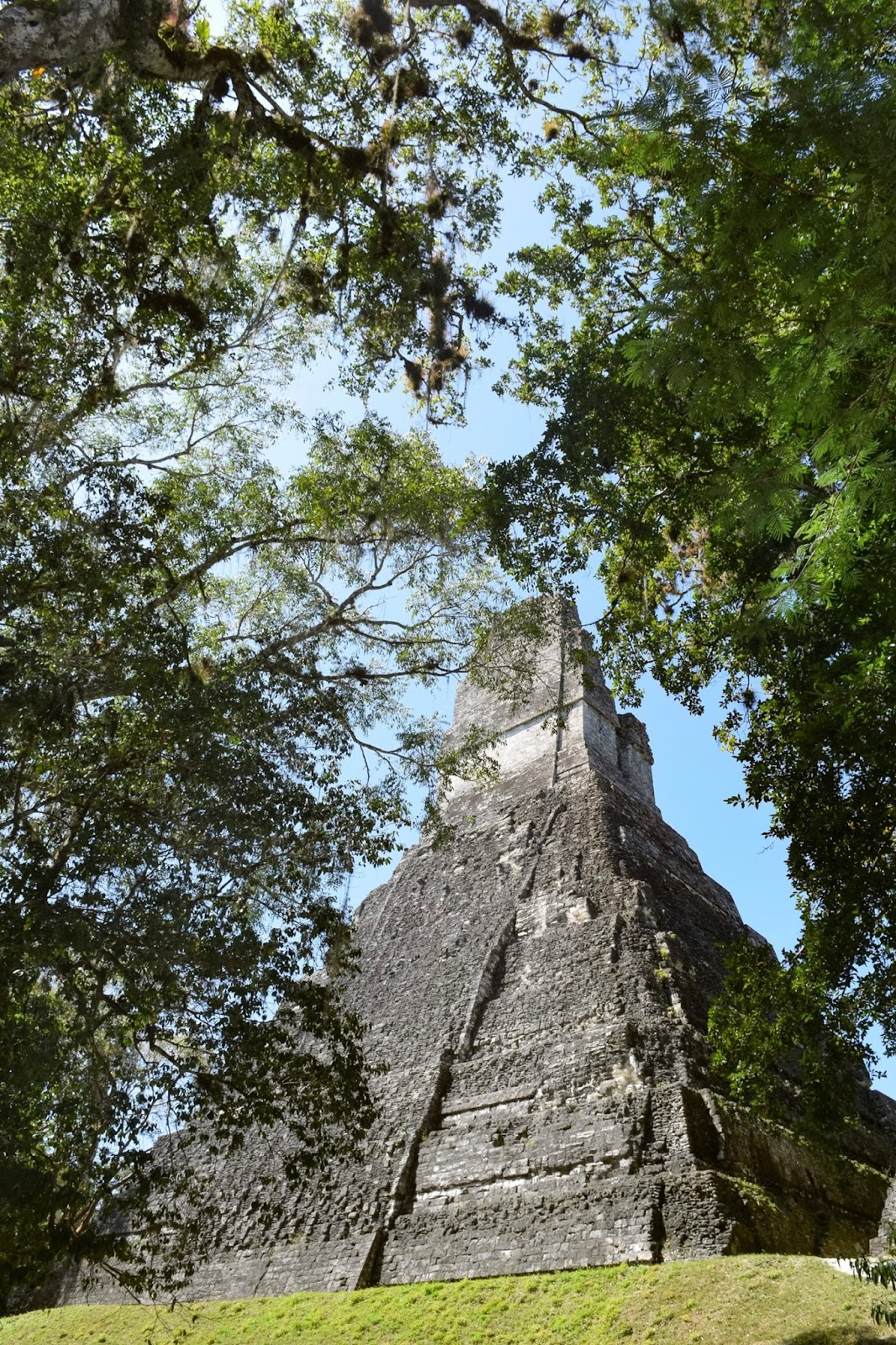 Over the years, since the abandonment of Tikal the jungle slowly grew over the city’s buildings. Due to it’s remote location in Northern Guatemala, travellers occasionally visited the area, but had to embark on a trek through the jungle for several days to reach it.

The first archaeological teams arrived in the 1880s, but it wasn’t until the 1950s when the local airstrip was built, that real excavation works actually began. The University of Pennsylvania has been working on uncovering Tikal since 1955.

Due to their lack of funding and the restrictions placed on them, they are generally only able to uncover one or two structures at a time, making the excavation process quite a slow one. 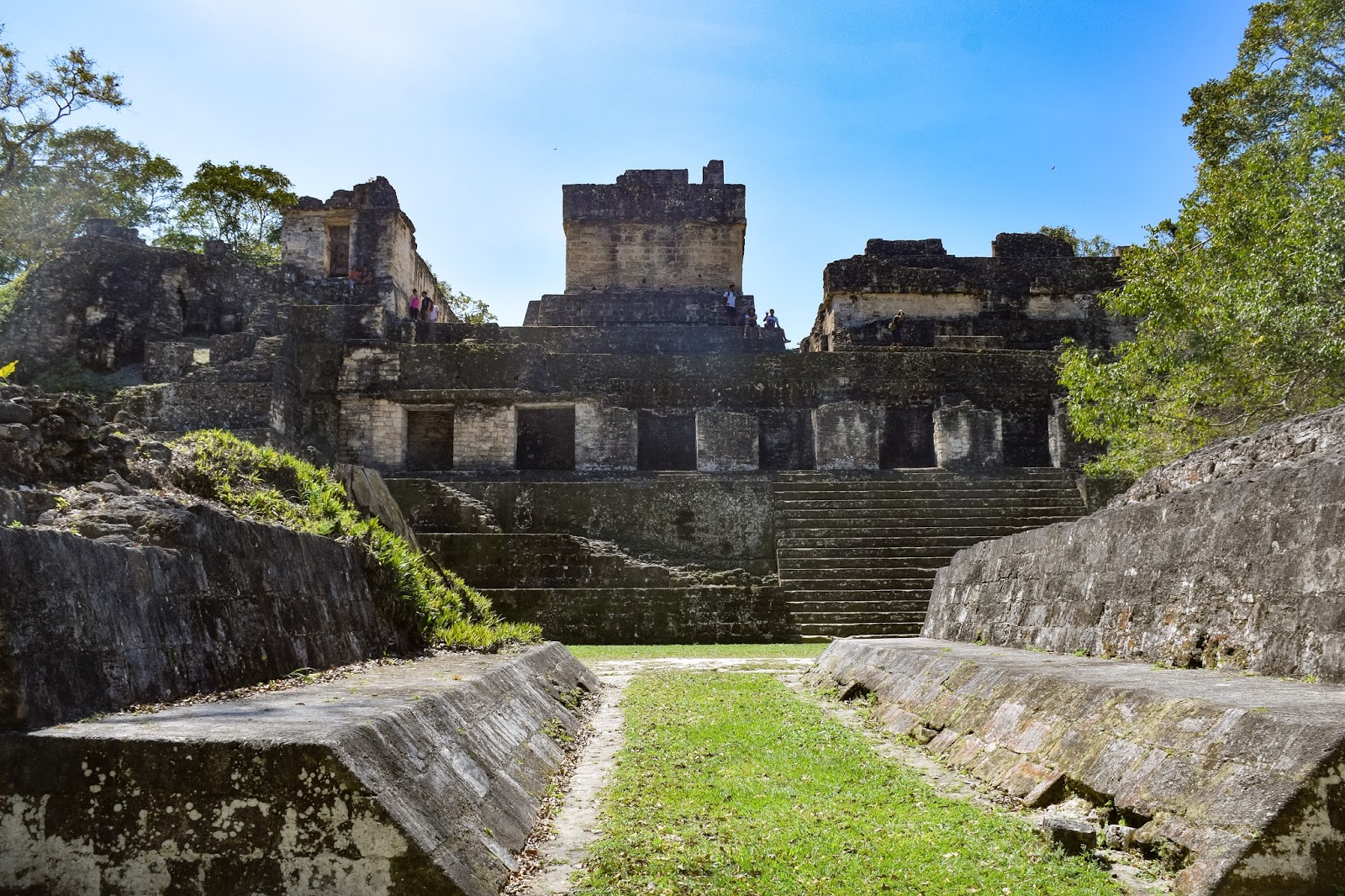 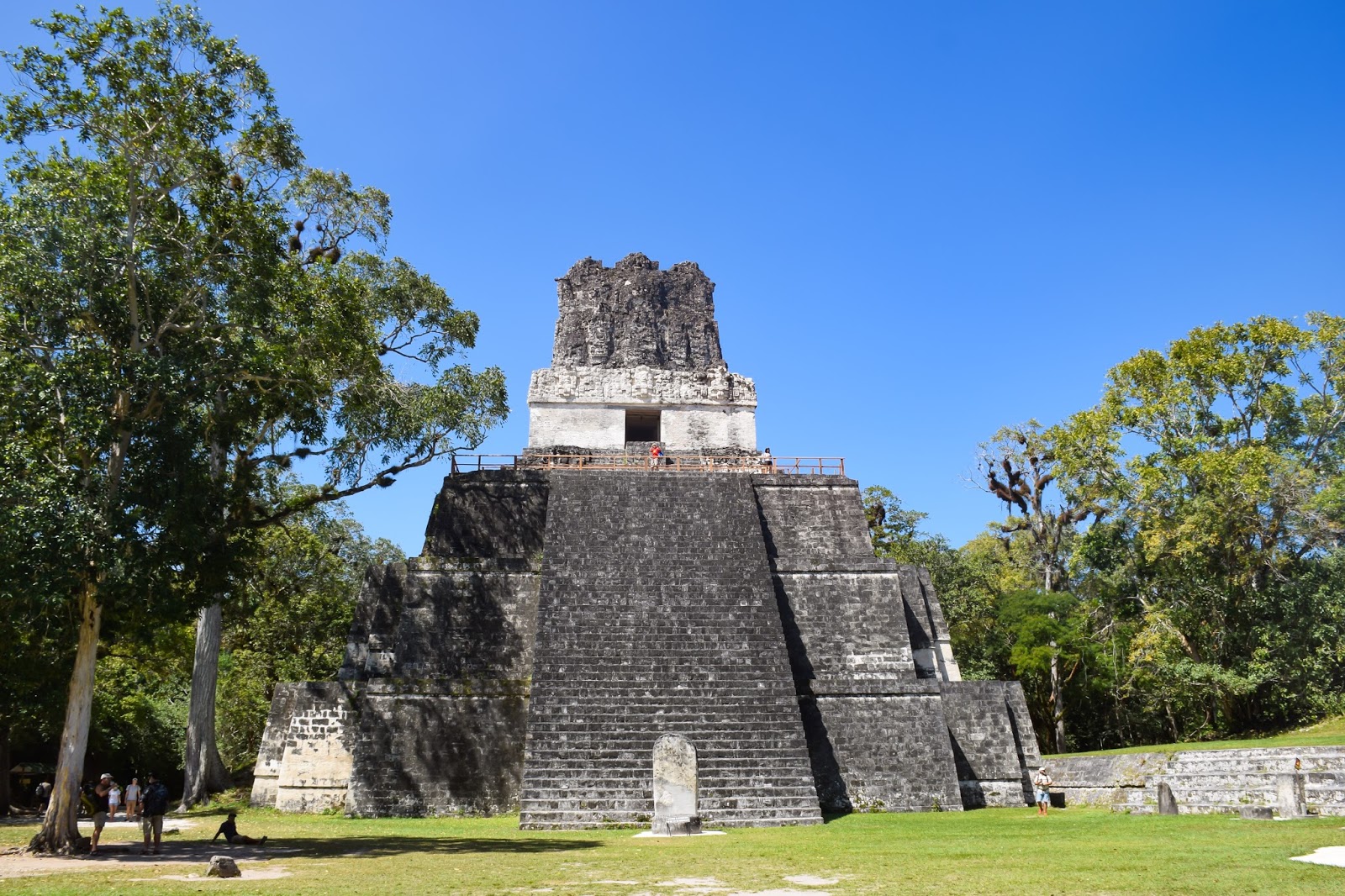 Since the excavation works began at Tikal most of the major buildings have been uncovered, however as you walk around the grounds you can see just how much of the city still remains underground. The jungle grew over the buildings so completely that often as we were walking past hidden building I wasn’t even aware that they were under there until the guide pointed them out!

Heaps of the main pyramids and temples have been uncovered, while many are still currently a work in progress. It’s so interesting to see how the park is being worked on while you’re visiting. Some of the buildings and temples that are being uncovered are held up by scaffolding to make sure they are structurally sound on their own when the jungle dirt has been removed from it.

During our visit there were many workers on site at the time, working to build new stairways and ramps to access the temple tops. 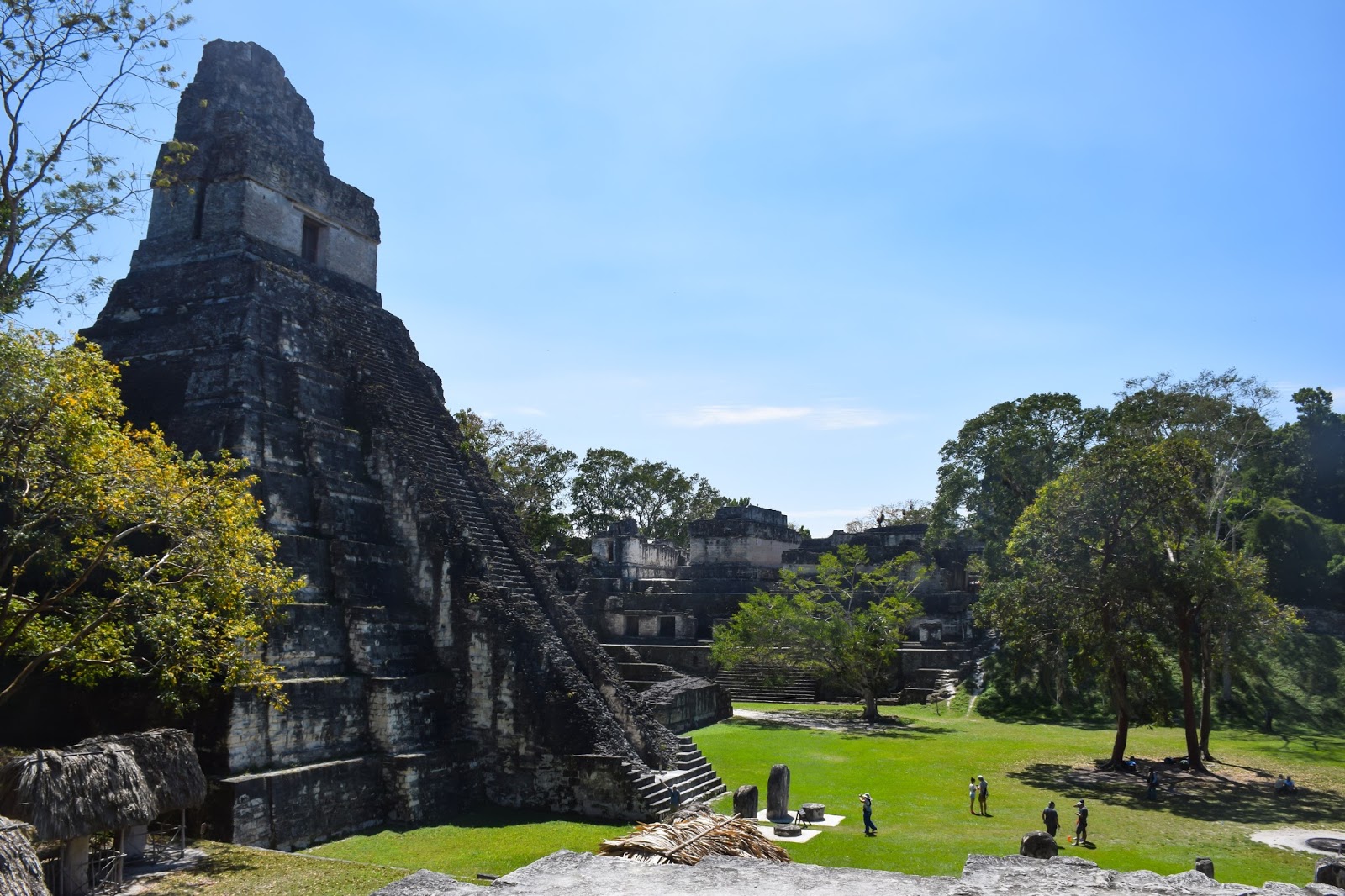 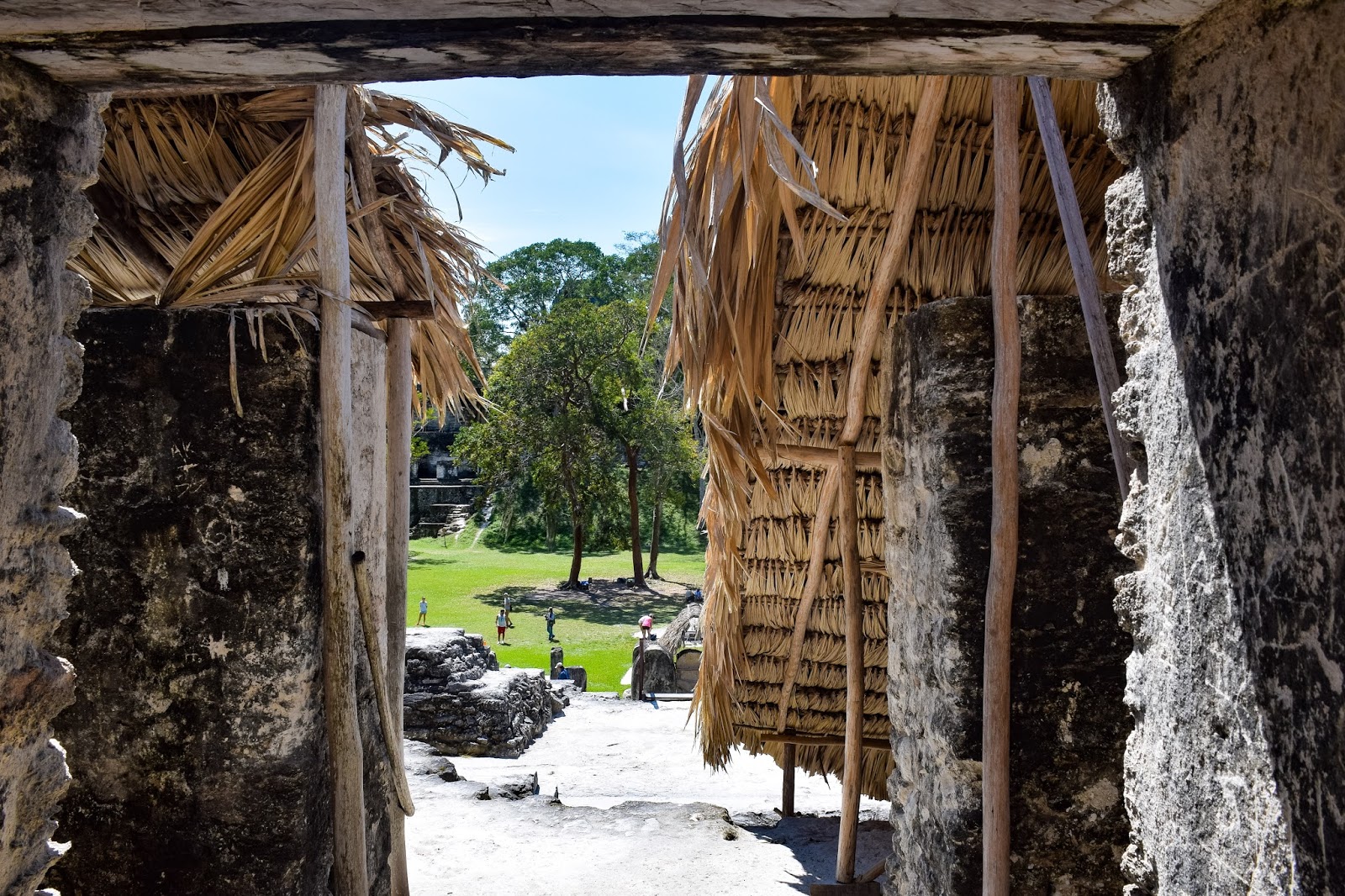 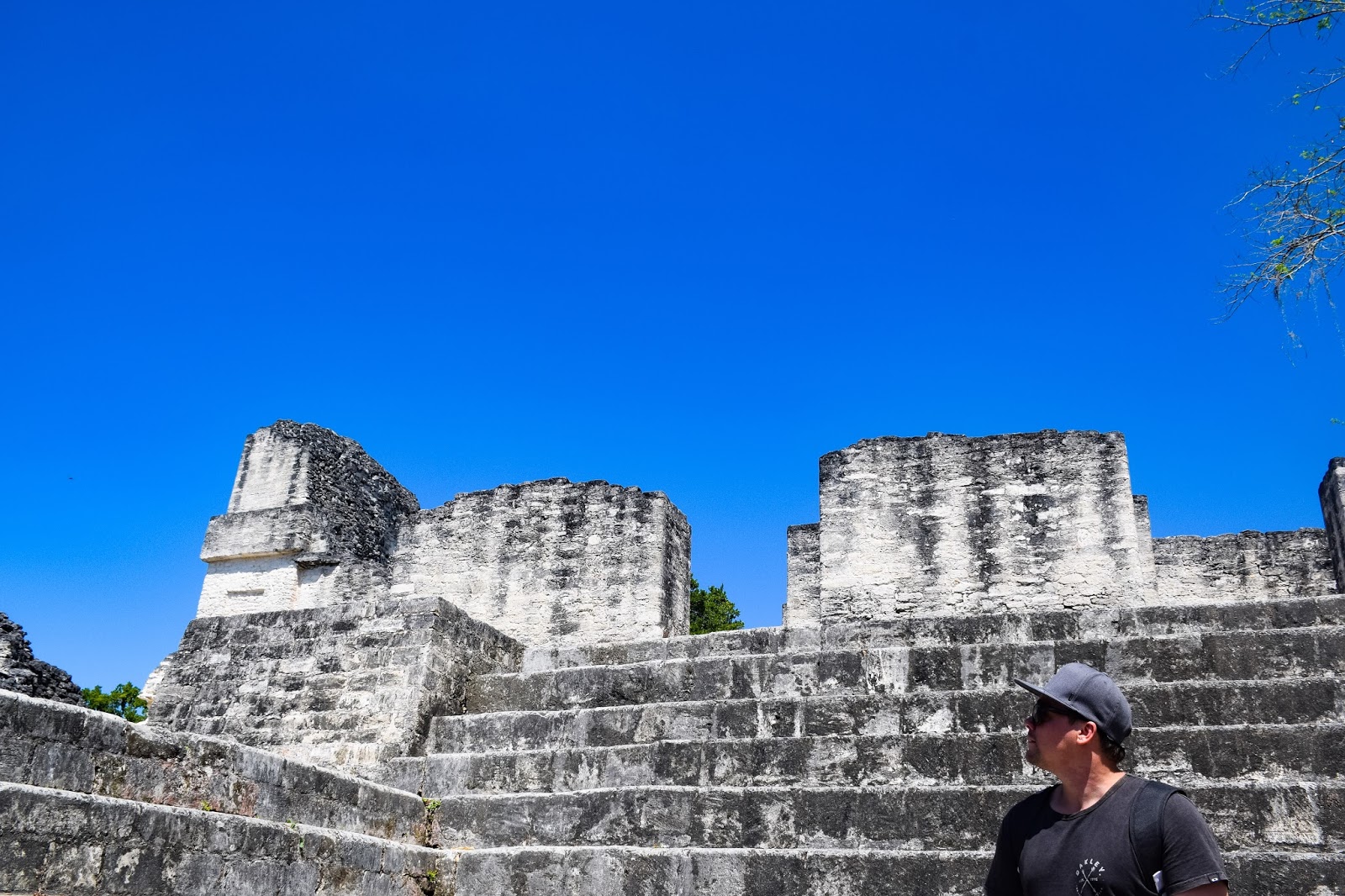 One of the most exciting reasons to visit Tikal is that unlike many other Mayan sites, you are able to climb several of the temples for an unreal view of the park and the surrounding jungle. Trust me, you will be dripping in sweat when you get to the top, especially if you visit during the hot season like we did, but the views are so worth it!

Due to the lower crowds you are able to take a moment to yourself and really soak in the experience, without selfie sticks and elbows poking into you everywhere you turn. SO GOOD!

For an even more magical experience, Tikal also offers sunrise and sunset tours, where you can watch the world change colour from the heights of the temples. These tours also often have the most wildlife encounters, as the jungle animals are the most active early in the morning and at dusk. Was anyone else looking for a cheetah when they visited, or was that just me?! 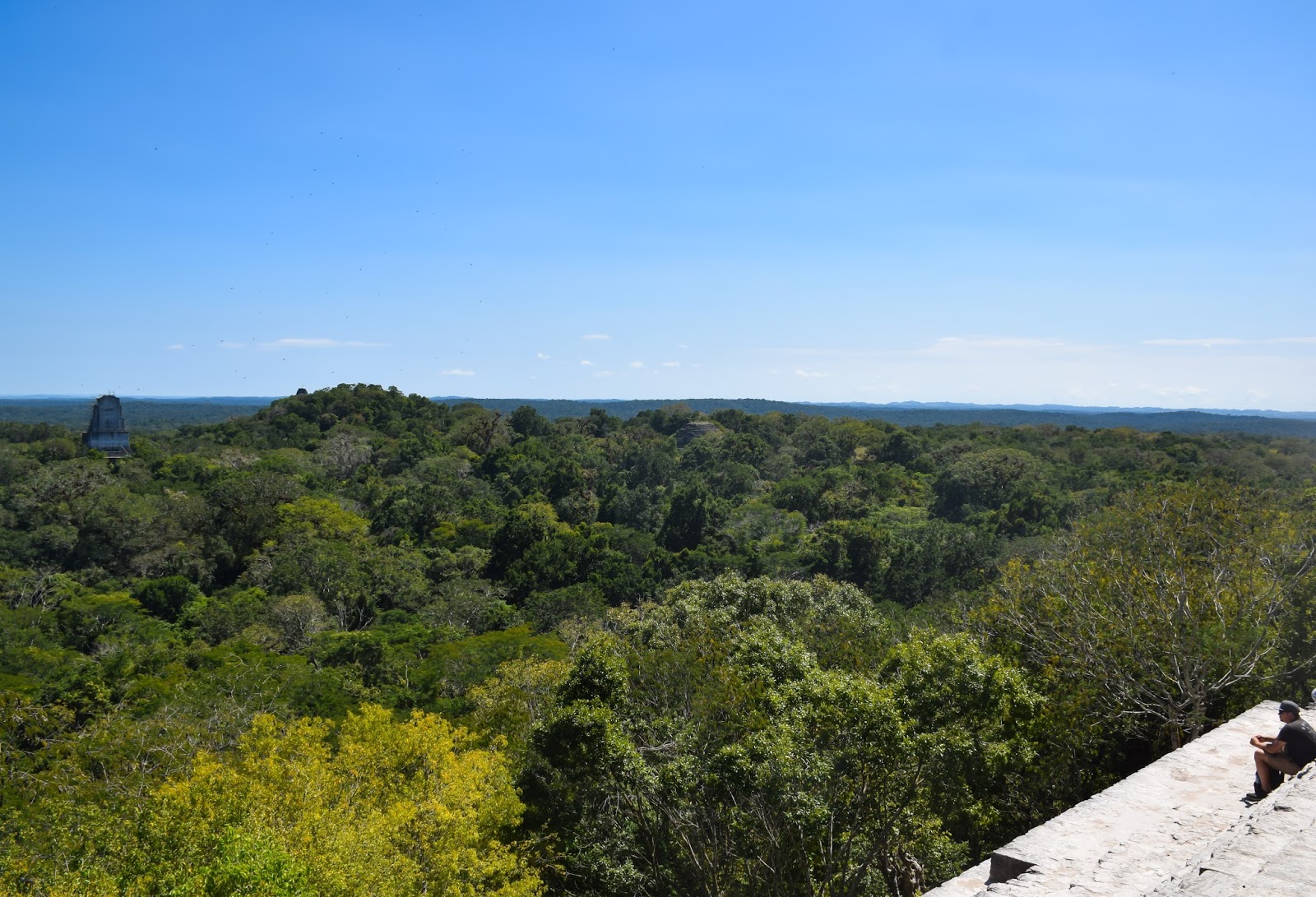 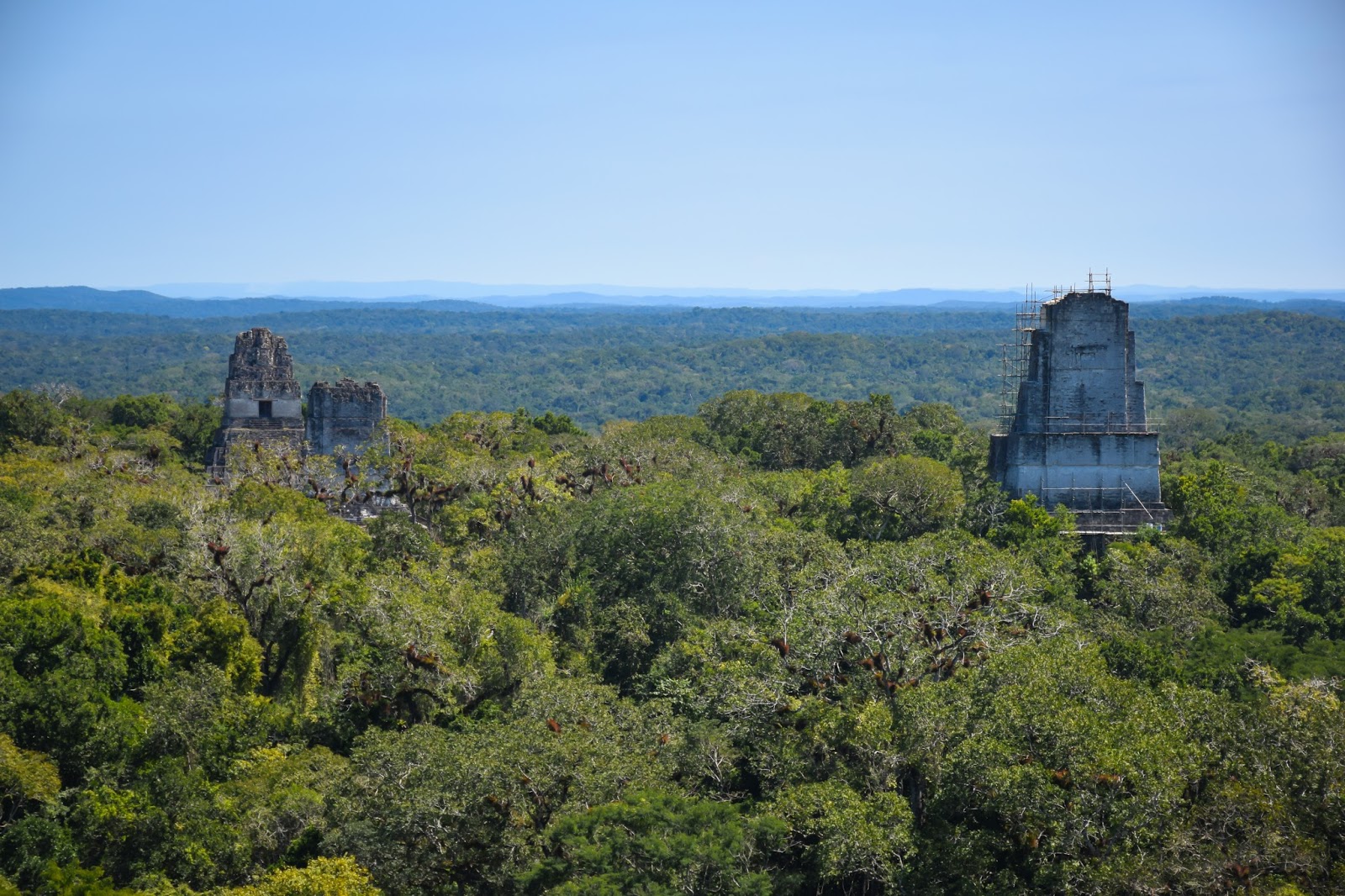 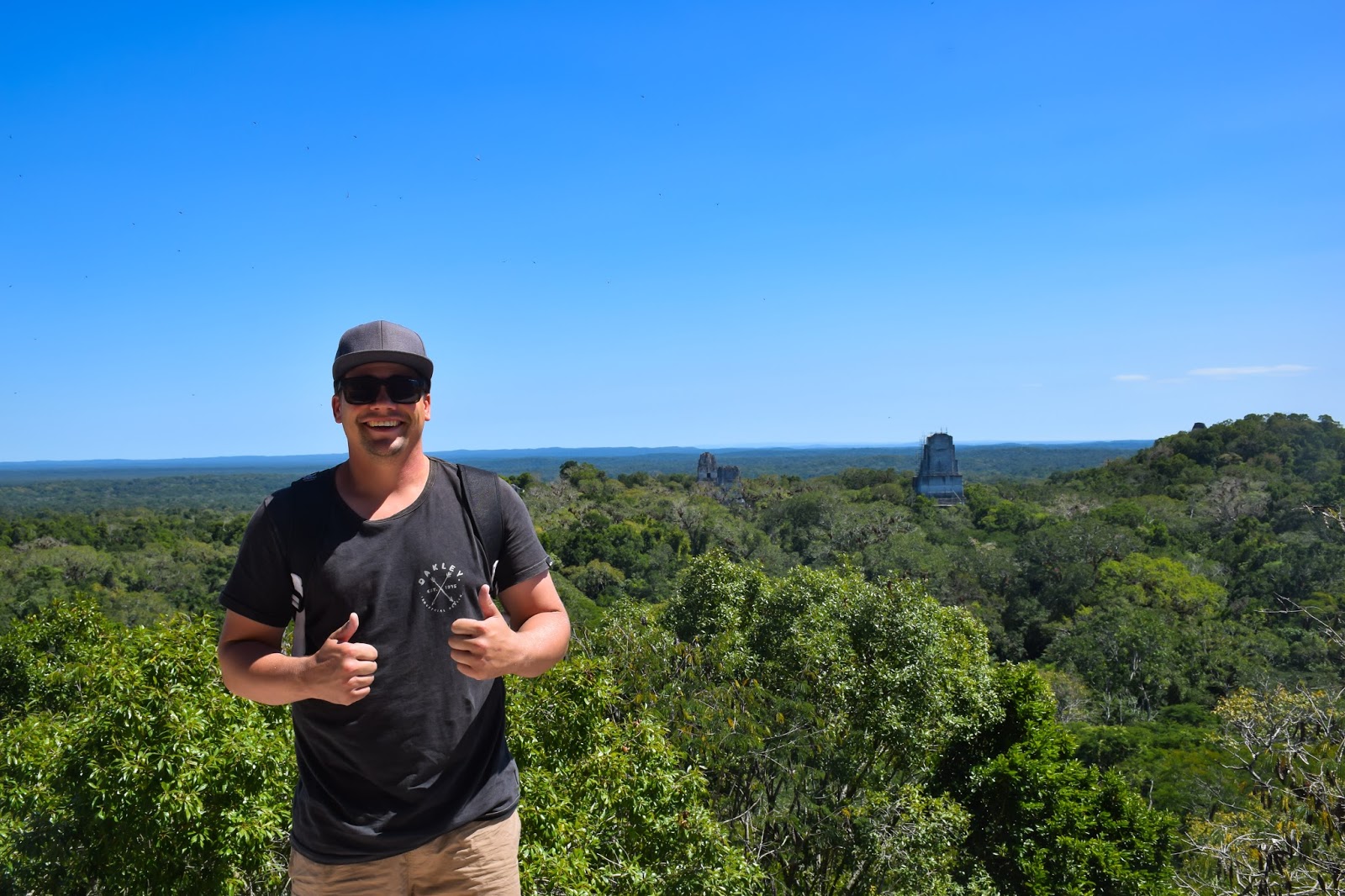 If you’re visiting Tikal we would absolutely recommend visiting with a guide for many reasons.

First, the sites are incredibly spread out around the National Park, and they know the best places to visit, the easiest paths to walk and where to find the best views and temples. If you take a wrong turn on your own you could easily end up an a very long inclined path with no buildings in sight.

Secondly, they are SO knowledgeable about the history of Tikal, requiring over ten years of guide experience before they can call themselves a Tikal Guide. Our guide was also able to translate glyphs from the Mayan writing and explain what was going on throughout the years that Tikal was a thriving city.

While the beauty of the National Park is definitely a highlight all on it’s own, the guides add so much to the experience and are an invaluable companion for answering all your questions. 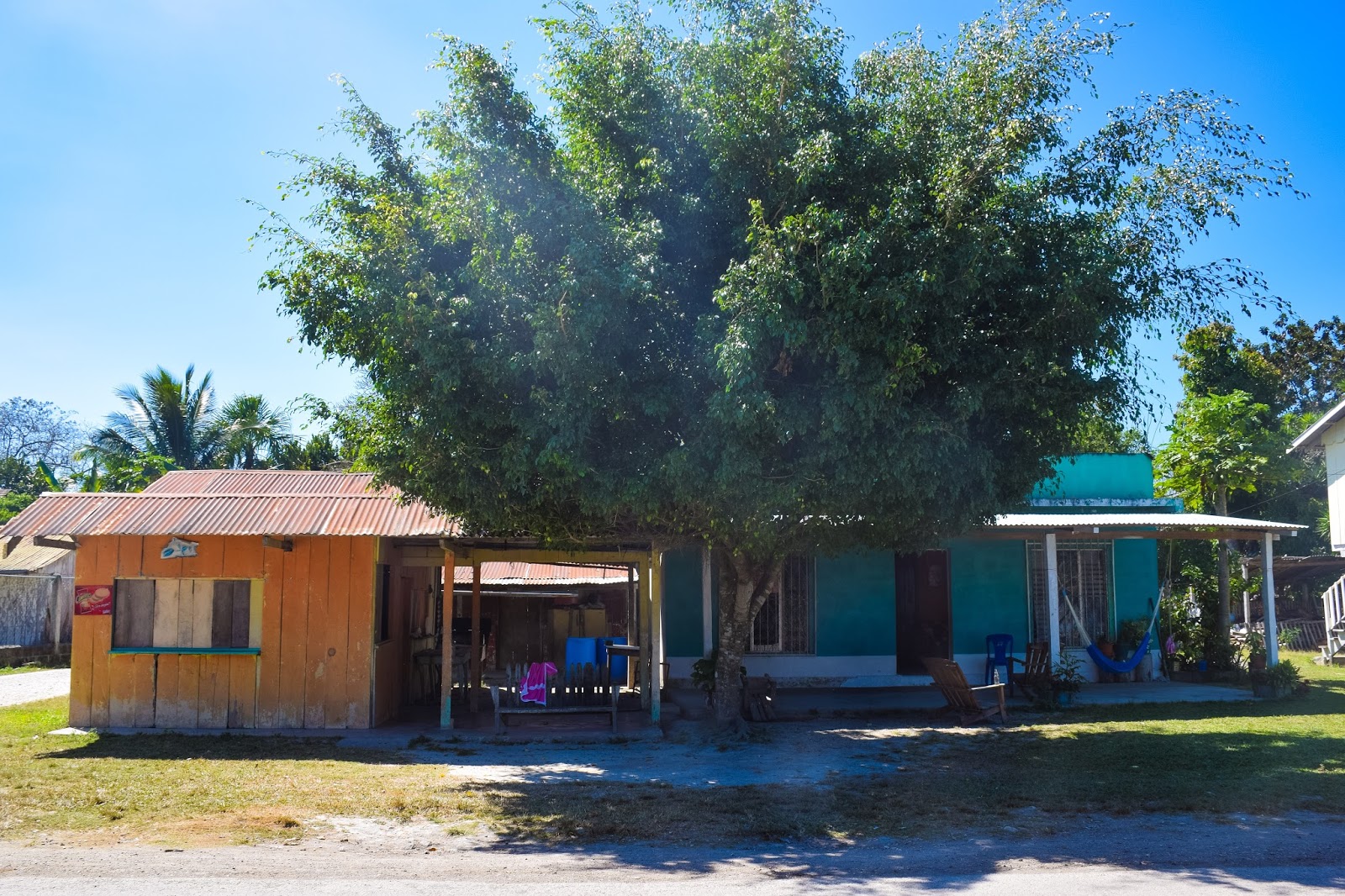 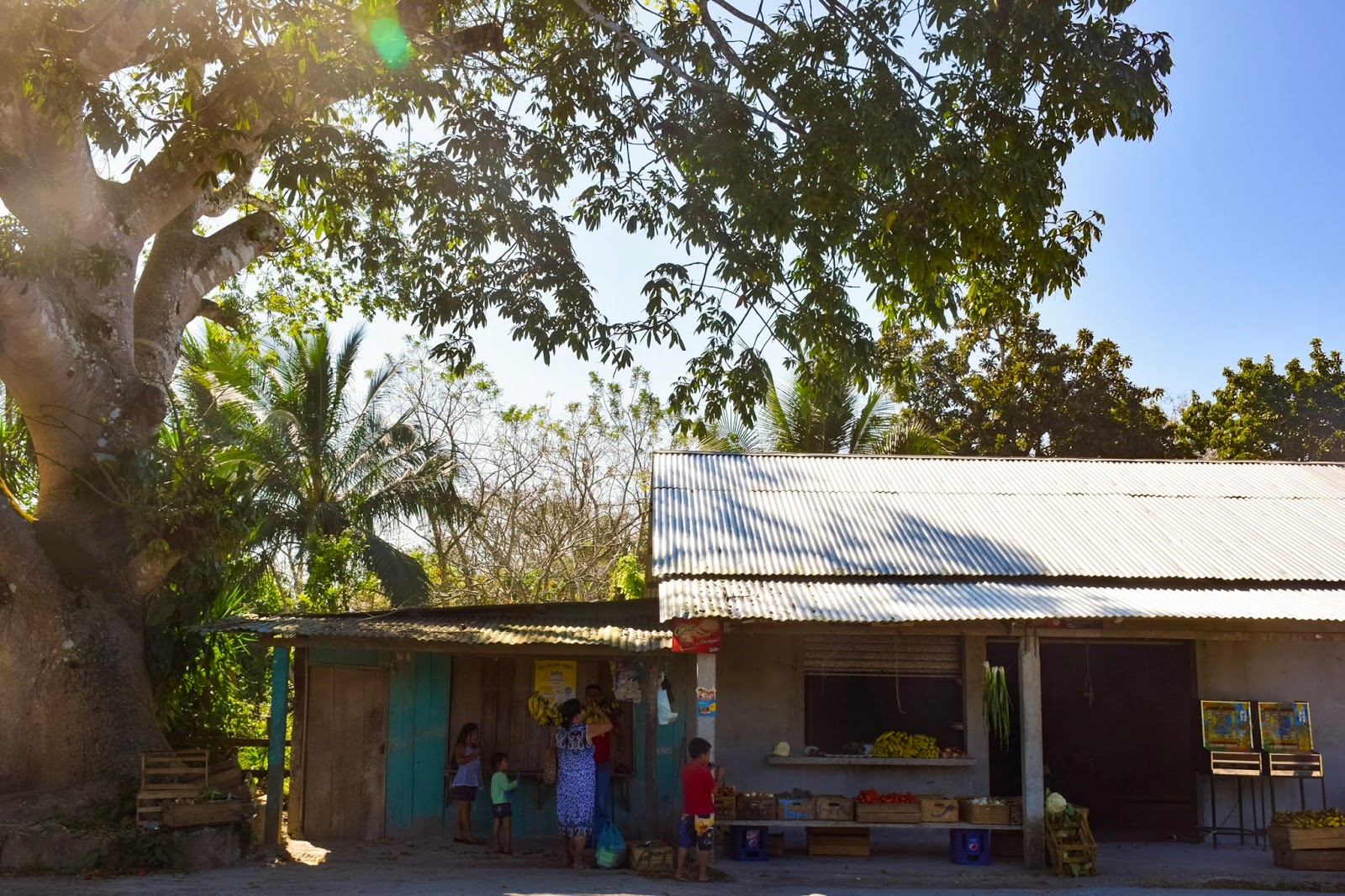 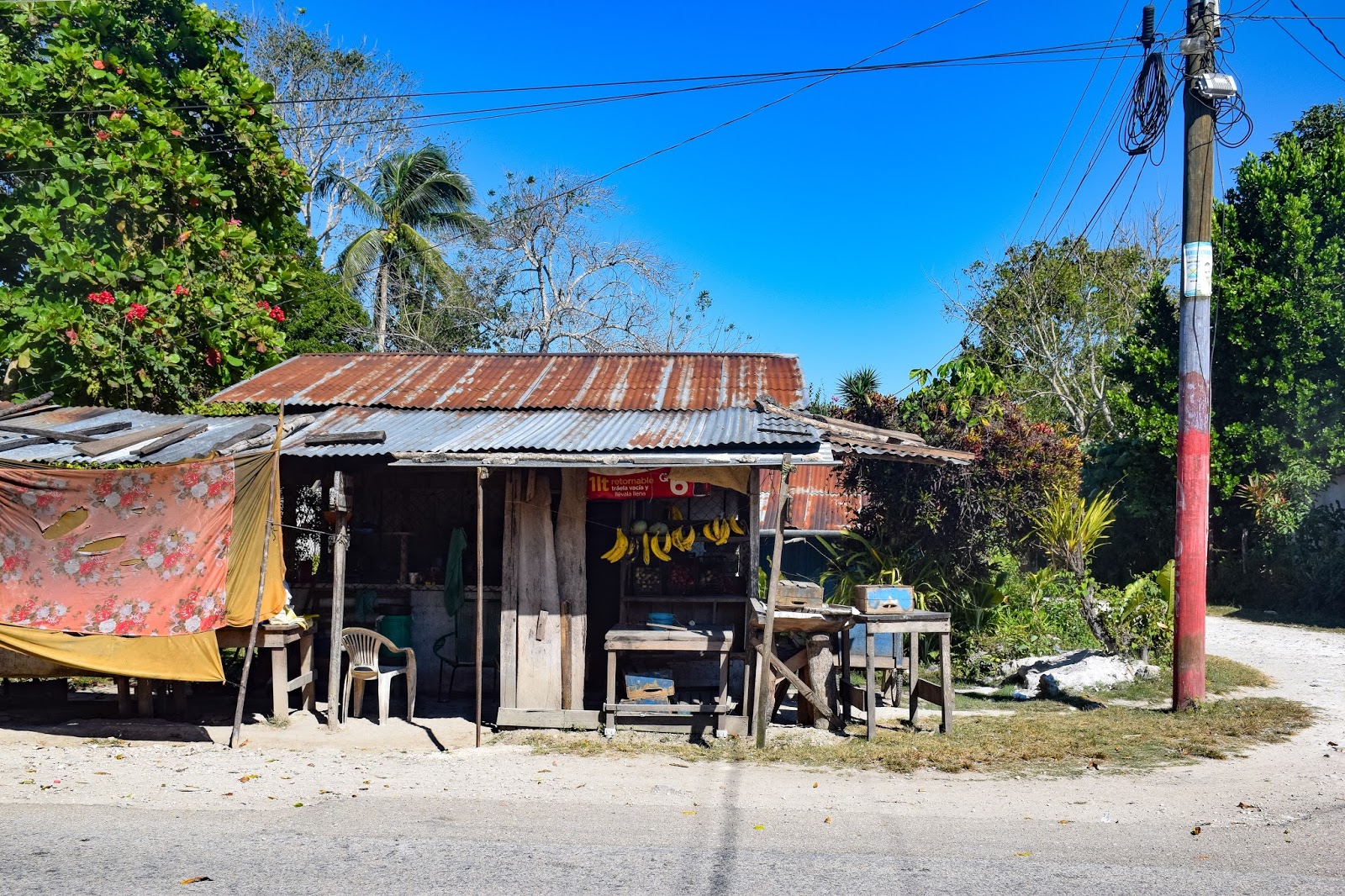 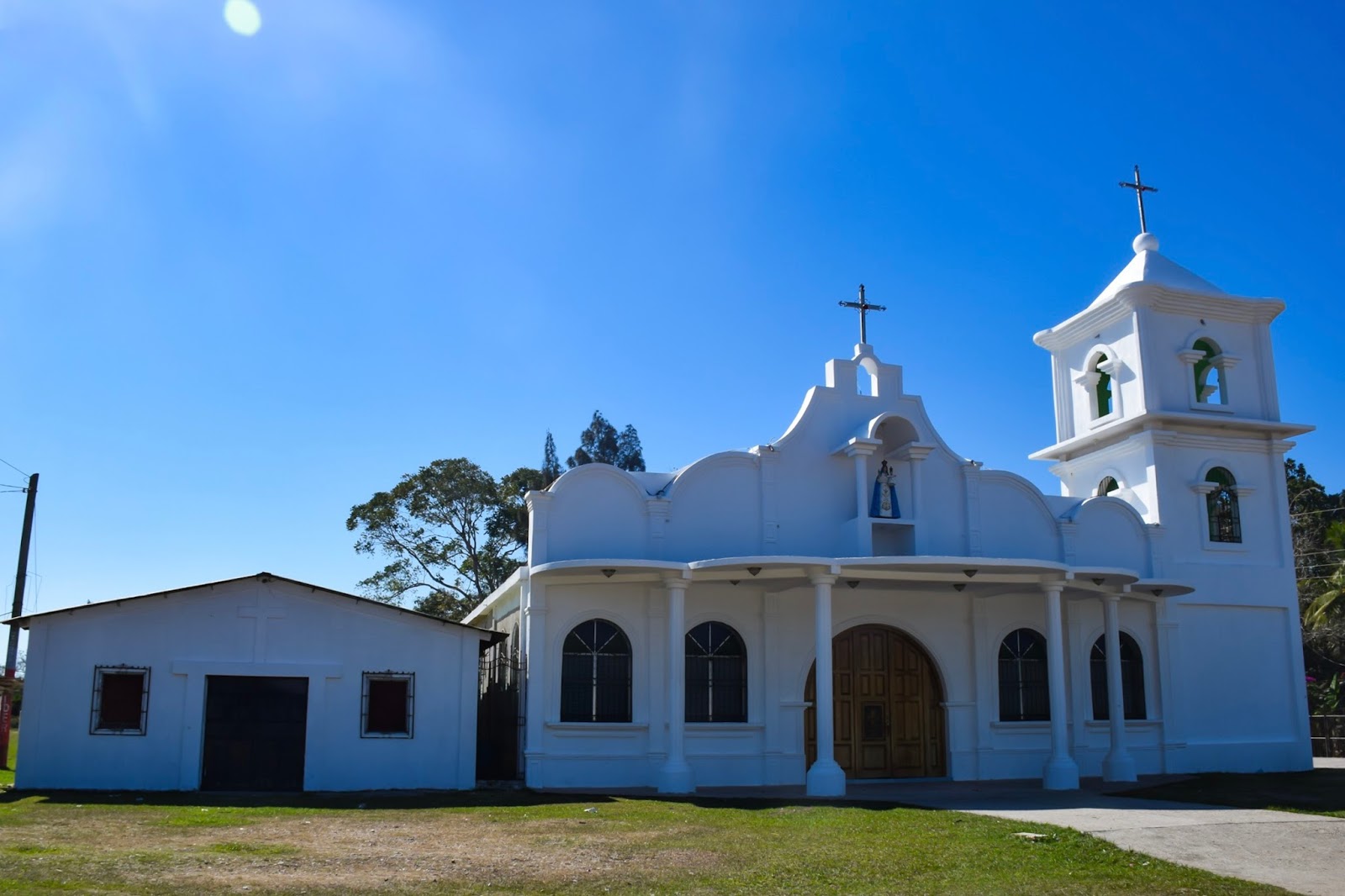 Lunch in a small Guatemalan town

After several hours of hiking around Tikal we were hot, sweaty, blistered and hungry! On our way back to Belize we stopped in a small Guatemalan town called El Caobato have some lunch and pick up some souvenirs. The town was so cute and colourful, with green, orange and yellow houses lining the streets and fruit stands along the roads.

I am not sure the name of the restaurant or gift shop we visited, but I think there is only the one in the town, with many tours and groups stopping to have lunch here around the same time we did. Lunch was a set menu with three courses of local Guatemalan dishes (with options for vegetarians), and it was delicious!

Afterwards we had a look through the attached souvenir and gift shop. I definitely wish I had of taken more spending money to Guatemala, specifically for the bags. OMG the leather and hand woven overnight bags, backpacks and sling bags were stunning, all completely unique from one another with all different colours, patterns and designs.

They were a little on the expensive side (the backpack I wanted was about $80 USD) so keep that in mind if you’re shopping, but the quality was outstanding and they were just beautiful! Definitely biggest regret of our Central American trip was not grabbing one! 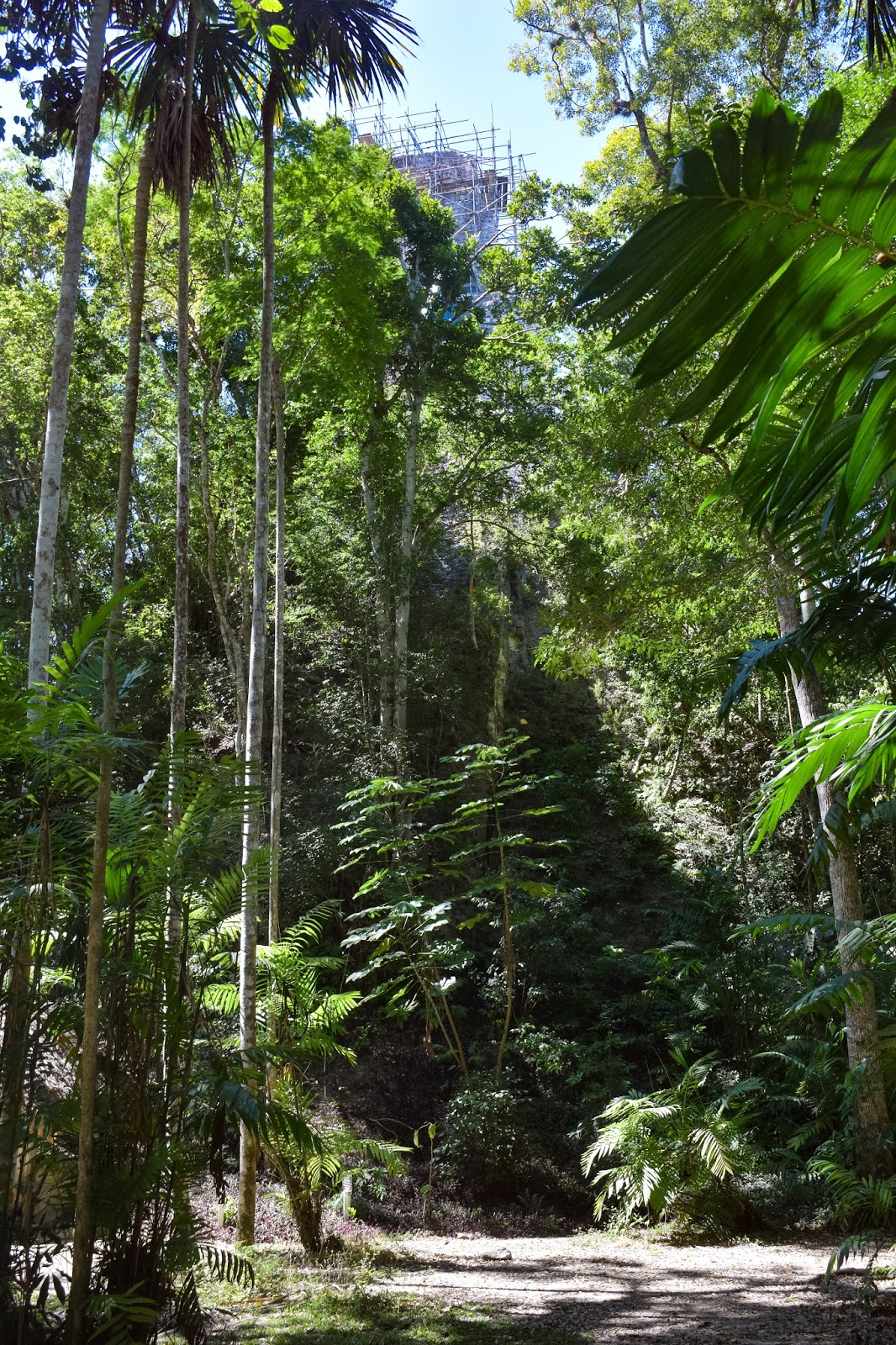 The tour cost us $145 USD per person and included hotel pick up (or you can meet in front of their offices in San Ignacio, Belize), park entrance fees, departure and arrivals fees, a local guide in the park and a fantastic lunch of local dishes in El Caoba.

Have you visited Tikal yet? Let us know if it’s on your bucket list!

Explore more of our adventures around Central America