Aerial photography is becoming more and more popular, with record numbers of drones hitting the air space each year.

And why wouldn’t there be?!

They take absolutely amazing photos, let you see the world from a new perspective and offer you a view you might have never got the chance to see otherwise.

However, in all the hype, pretty images and stunning landscapes, it can be easy to forget that drones can actually be quite dangerous. There are rules and laws that must be followed by anyone launching a drone into Australian air space, that have been created to keep everyone safe.

Before you launch your drone on it’s first flight, here is everything you need to know about flying a drone in Australia. Flying a drone in Australia

The best place to start is on the Civil Aviation Safety Authority‘s website (CASA). From here you can find everything you need to know about the rules for flying safely, drone registration, safety apps, getting a remote pilot licence and more.

Let us break it down for you though –

What are the rules?

As drones get more advanced, and there are more of them flying around in the sky than ever, the rules are constantly changing to keep everyone safe.

Whether you fly your drone everyday or only once in a while it’s a good idea to sign up to the CASA’s drone mailing list so that you’re up to date on any new changes that might come into effect.

At the time of writing this post, the laws state that you do not need a licence if you’re flying a drone weighing less than two kilograms for recreational purposes.

For the purpose of this post, we are going to focus on the use of drones for recreational reasons. If you’re looking to drone for any kind of commercial purposes (i.e., you’re making money from your images or videos), make sure you find out the specific rules for your classification.

There are two different groups of rules you need to think about when you’re flying your drone:

Australia Wide Rules: These are a set of nationwide rules set by the CASA, and must be obeyed by anyone flying a drone anywhere around Australia.

National Parks: Ruled individually by each state, the national parks authorities are responsible for the preservation and shared enjoyment of parks across their state.

To make life more annoying, these rules are all different and change all the time. We’ll get into all the specifics for each state a little further on in the post. The dos and don’ts of flying a drone in Australia

Set by the CASA, these are the basic rules that you must adhere to when flying a drone in Australia.

You must not fly your drone – 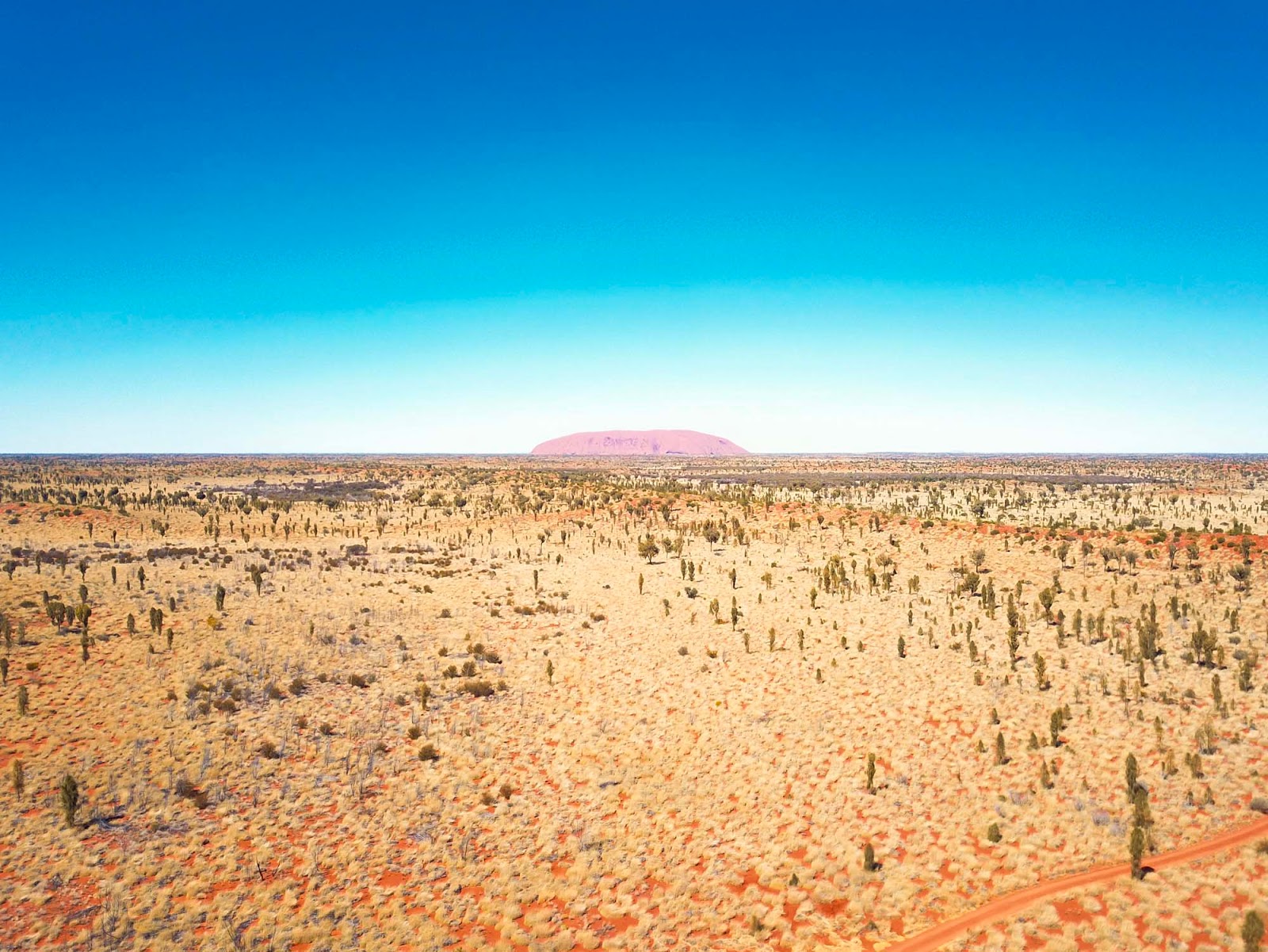 Provided you’re following the rules outlined above, you’re generally able to fly anywhere across Australia that is not considered a National Park, including the outback, river systems, ocean waters and beautiful coastal beaches.

Australia is known for it’s beautiful natural landmarks, spread all across the country and if you ask us, many of them are best viewed from the sky. However, some places have their own specific rules that you need to be aware of if you’re visiting.

Places you can fly over

Places you can not fly a drone

Some other general no fly zones include

If you’re just flying your drone for fun, make sure you check out the CASA’s Know Your Drone page, where you can find out more information on all the rules and take the quiz to test your drone knowledge. 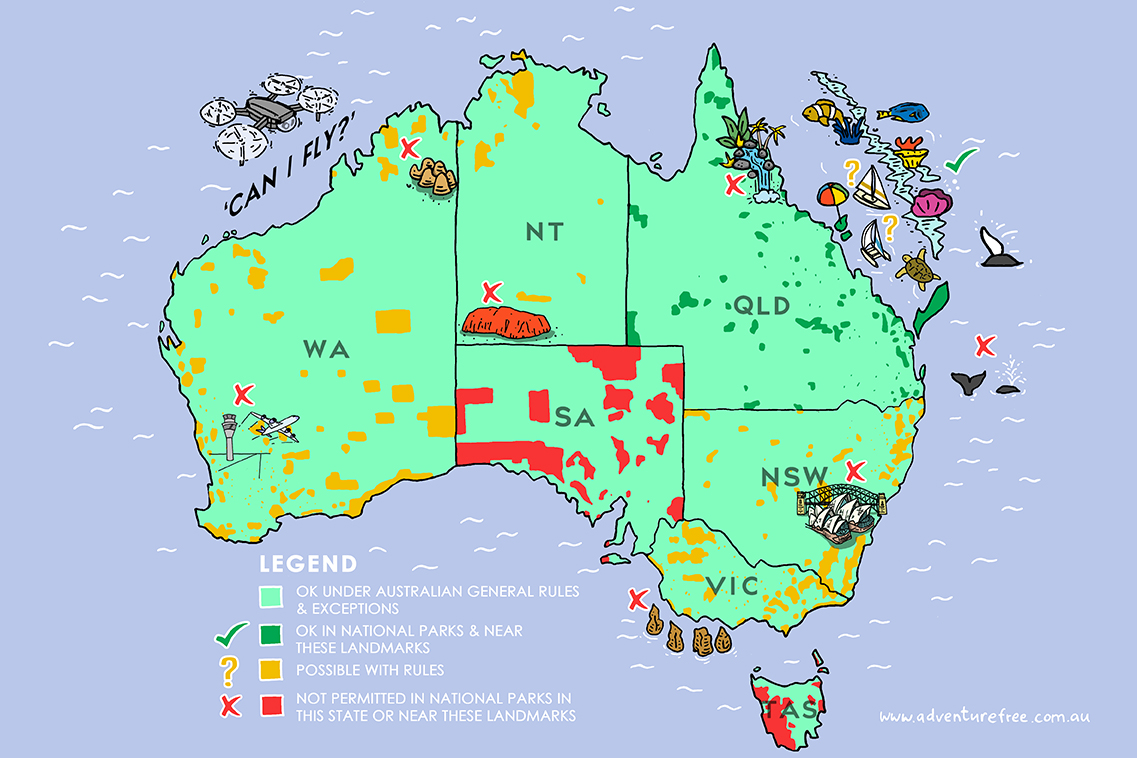 Above image from Reef Free Tours

National Parks often have their own set of rules for flying drones. And to make things even more annoying, across Australia different states have different rules about flying in National Parks. The below information has been taken from the Parks website for each state.

Parks Victoria consider drones to be planes, and the recreational use of drones by the general public is prohibited on Parks Victoria managed land. If you really want to fly within a National Park in Victoria you will need to obtain a permit.

However, a great loophole in Victoria is that if you take off and land your drone from outside the park, don’t disturb any wildlife and stick to all CASA regulations you can fly wherever you like.

You need approval to launch, land or operate a drone from within a national park or other reserve managed by the NSW National Parks and Wildlife Service.

NSW National Parks and Wildlife Service may grant consent for the recreational use of drones in a park if they do not cause nuisance or risk or other visitors or wildlife, do not interfere with park management operations and the drone use only operates in the consented area.

For recreational purposes you do not need a permit to use a drone in Queensland’s National Parks, as long as it weighs under 2 kilograms, there are less than 10 people involved in the film shoot and no buildings or structures are being filmed.

READ MORE:
The Ultimate Day Out to the Whitsundays

The operation and use of drones on reserved land is not permitted unless specific written authority has been provided by the Tasmanian Parks and Wildlife Services (PWS).

Find out more: Drones in Parks in Tasmania It is an offence to fly drones (remotely piloted aircraft) in South Australia’s national parks, reserves and marine park restricted access zones without a permit. Permits are considered for scientific research and commercial filming.

Find out more about obtaining a permit for filming and photography in South Australia parks.

Anyone wanting to fly their drone in WA’s national parks and other conservation reserves are required to follow five easy rules that you can find out more about here.

Most of the rules are inline with the national guidelines set by the CASA, with the exception of the last – drone users are requested t contact the relevant district office prior to each drone flight to ensure that aerial and other park management operations are not interfered with.

You need a permit to fly a drone in a Northern Territory park or reserve and must fly only at approved parks. With a permit you can fly your drone in areas generally open to the public at approved parks provided your follow a few extra NT guidelines.

Find out more – flying drones in parks in the Northern Territory

One more important piece of advice: If you’re travelling with your drone, it is a good idea to remember that CASA regulations states that all batteries must be in your carry on luggage. To avoid damage, it’s always a good idea to carry all photography equipment in your carry on luggage – but this makes it even more important, as you will have a lot of trouble if you’re trying to check in drones or batteries in your suitcase. Additionally, if you’re batteries are over 100Wh you actually need to inform the airline before flying. 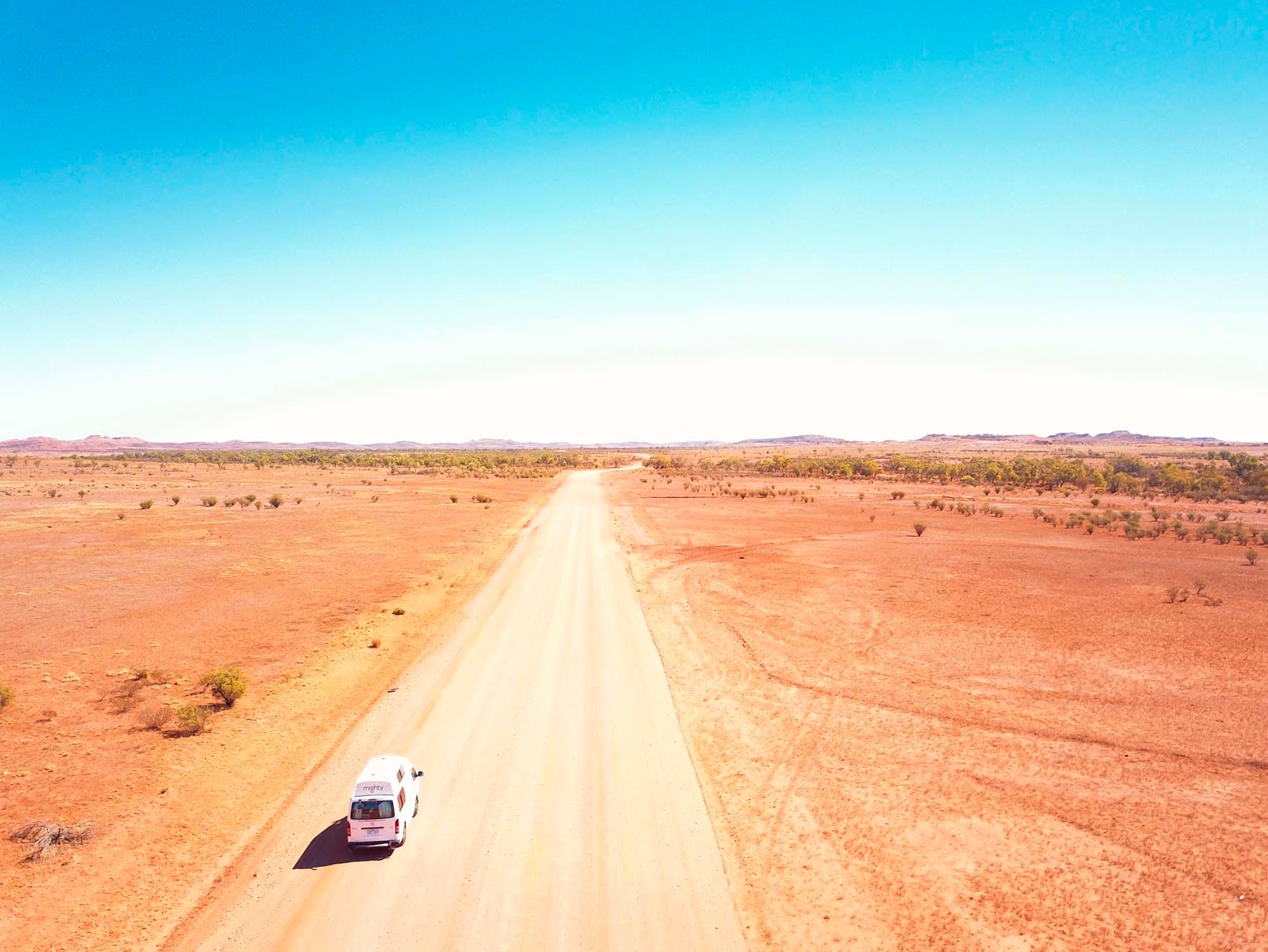 Never question if you can fly somewhere again by download the CASA-verified safety apps that help you easily identify where you can safely and lawfully fly in Australia.

Find out more and download the OpenSky app here. 15 Tips For Camping With A Baby Where To Hug A Koala In Australia Our Best Day Ever: A Look Inside Our Wedding Day